Subscribe to the Blog!
You are here: Home / Baking / LANE CAKE: A SOUTHERN TRADITION 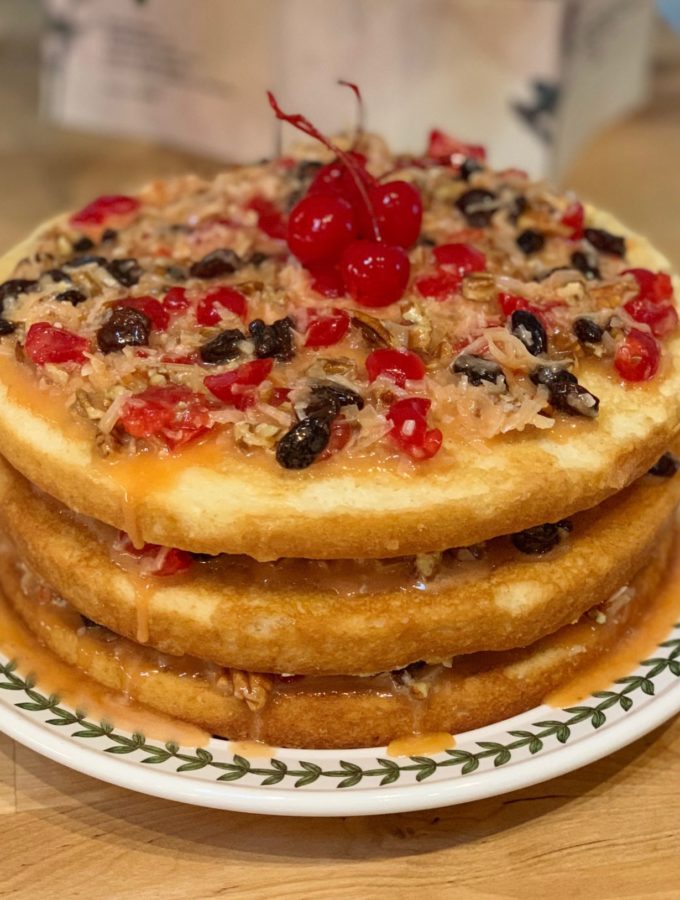 As a rule I am not terribly fond of cake, which made it odd that I suddenly had a desire to bake one.  Until I realized the fact that my birthday was this week might have something to do with it.  You may think baking yourself a cake for your birthday is weird (and perhaps a touch pathetic) but it’s a gift to myself.  I enjoy the process of baking and I get the kind of cake I like: three layers (more room for gooey filling), bourbon and coconut.  Lane Cake, kind of a Southern version of German Chocolate Cake but without the chocolate.  It’s gooey and decadent and I’m surprised there isn’t a restaurant in town serving this.  It’s that good!

My inspiration came from one of those supermarket cookbooks strategically placed next to the cash register in order to the capture the attention of someone like me.  Of course, the recipe in the cookbook, which had been published in Southern Living Magazine in 1966, was wrong.  It took me a couple of tries and some online research to get the proportions sorted out but finally I ended up with a light sponge cake and a lovely bourbon-fruity-caramel filling.

If you are interested in the history of Lane Cake, and the history of Southern cakes in general, here is a link to a good article. Most relevant for me was the throwaway line at the end that the cake was best made a few days before and allowed to “age”.  Kind of like a good homemade fruitcake (yes, such a thing does exist), it allows the bourbon and other yummy flavors to seep into the cake itself.  How did this step get lost in translation?

One word of caution:  this is not the easiest of cakes to make.  You can do it.  Just take it a step at a time and be confident. And have fun!

Start by making a sponge cake.  Separate eight eggs, reserving the yolks for the filling.  Beat the egg whites in a clean bowl until they form a little mountain peak when you take the beater out.  Don’t beat them so long that they become dry and clumpy. 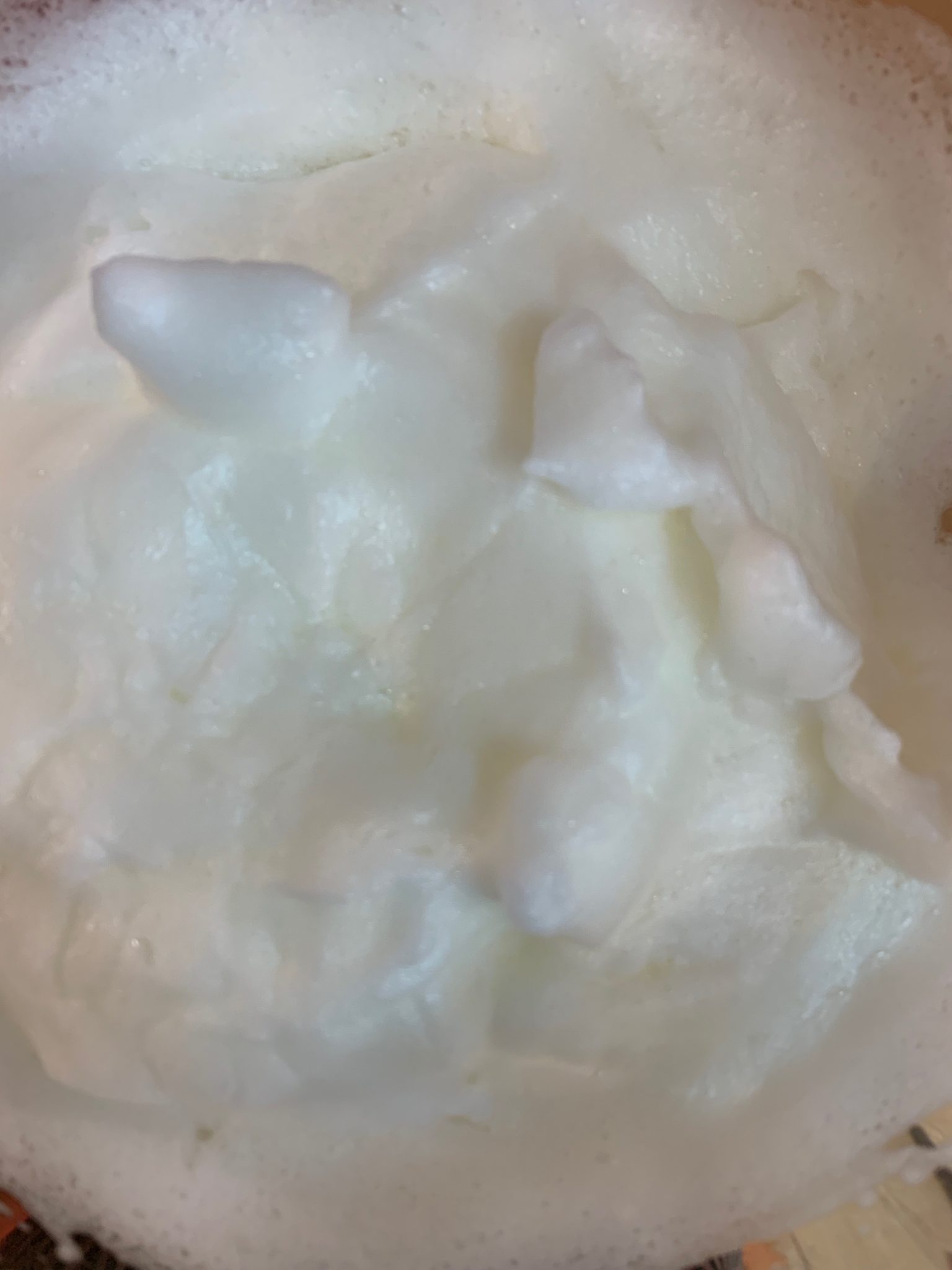 The eggs whites should be shiny and hold a peak when you remove the beater.

In another bowl, beat together the butter and sugar until it is light yellow in color and fluffy.  This takes about 3-4 minutes in a stand mixer on medium. 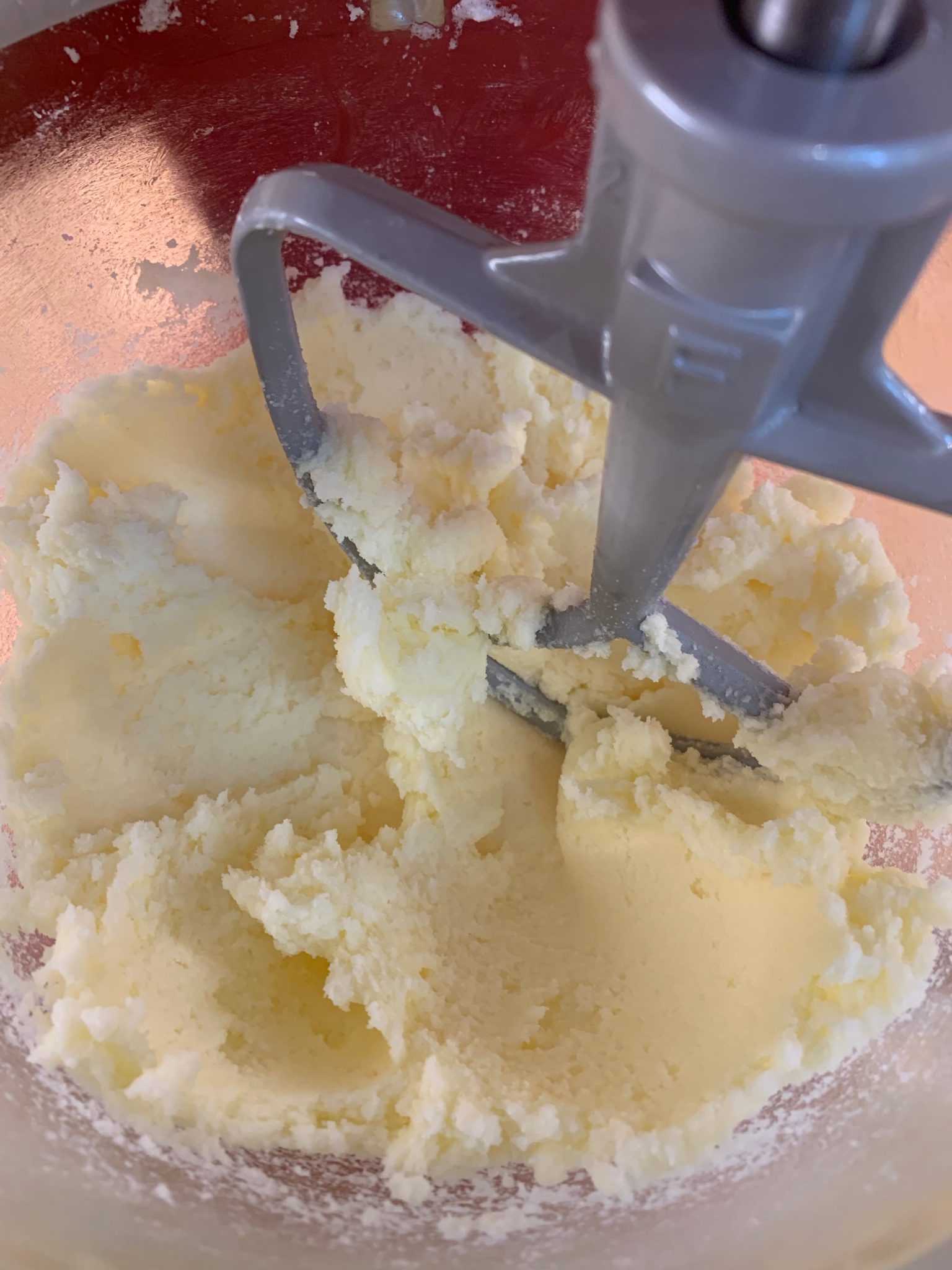 Butter and sugar beaten together until light and fluffy

In turns, add the sifted flour and the milk. 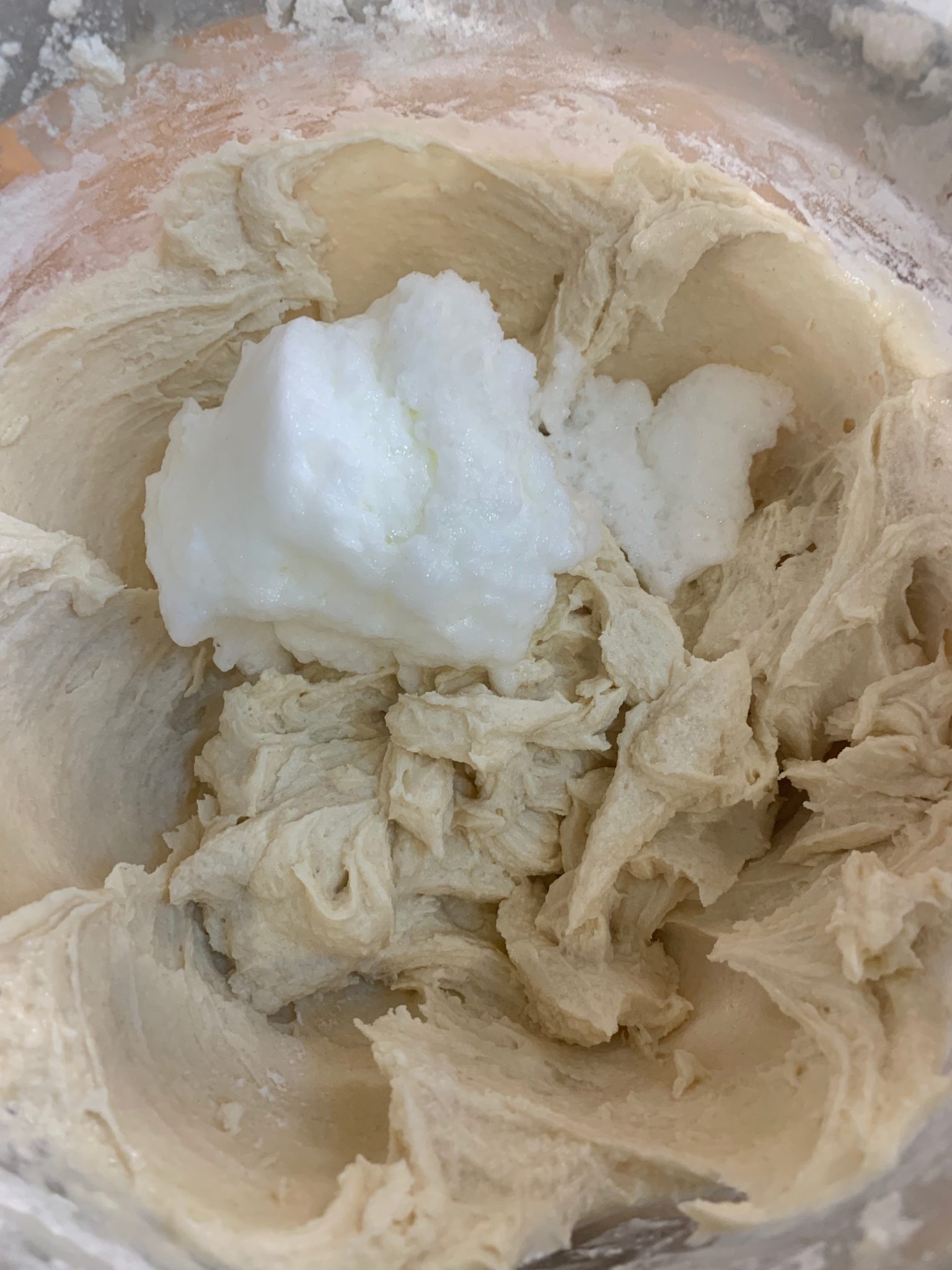 Put the batter evenly into three prepared, 9” cake tins and bake for about 20 minutes until the top springs back when you touch it and a toothpick comes out dry.

Cool the cake completely before going on to the next step.  You can make the cake a day before or even make and freeze it and finish the cake later.

When you are ready to make the filling, it is best to get all of your ingredients together before starting.  If you have an insta-read thermometer have it ready too. 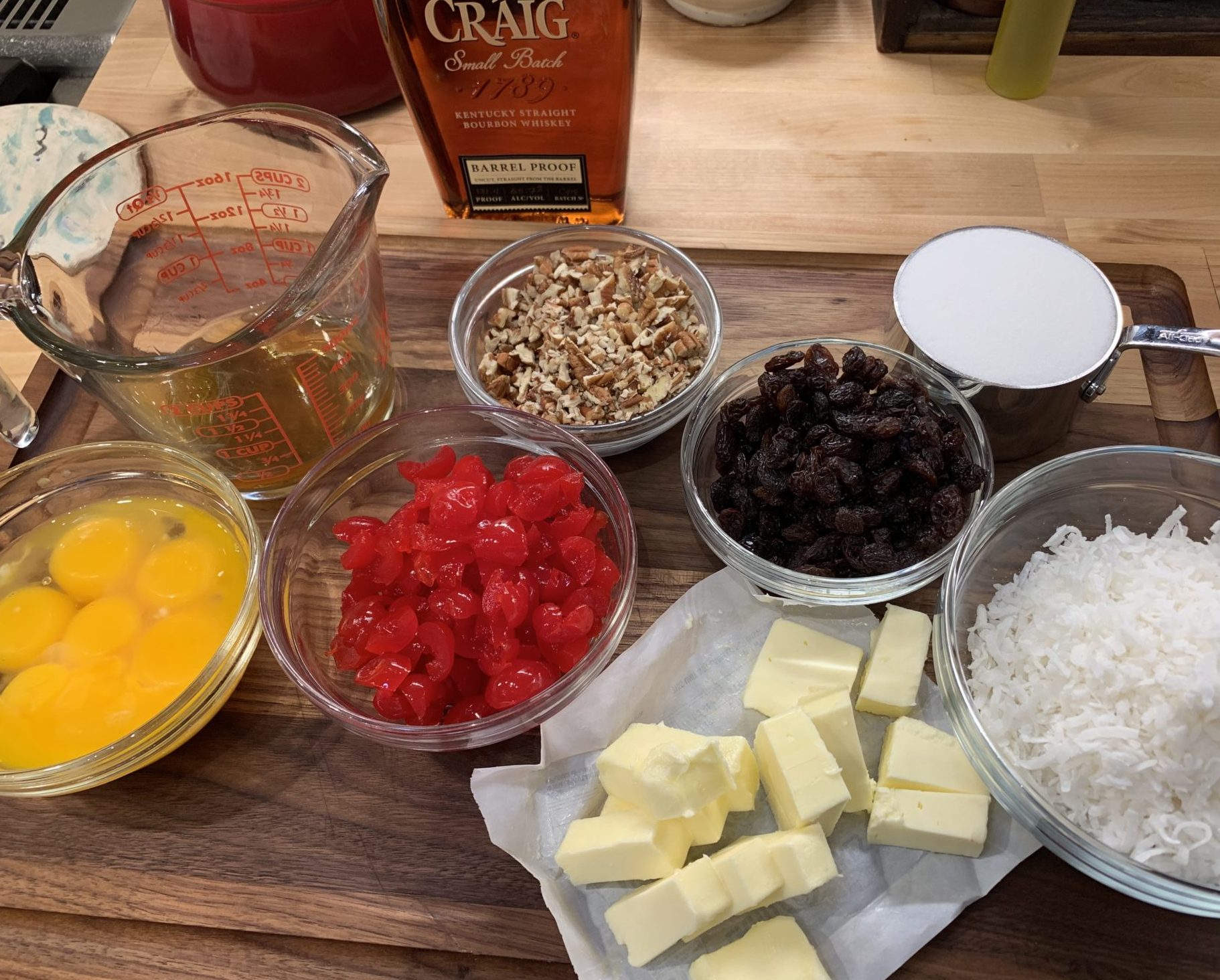 Have all your ingredients ready before starting

Put the eggs in a heavy bottomed medium saucepan and whisk them together. Add the butter and sugar and put it over medium heat. 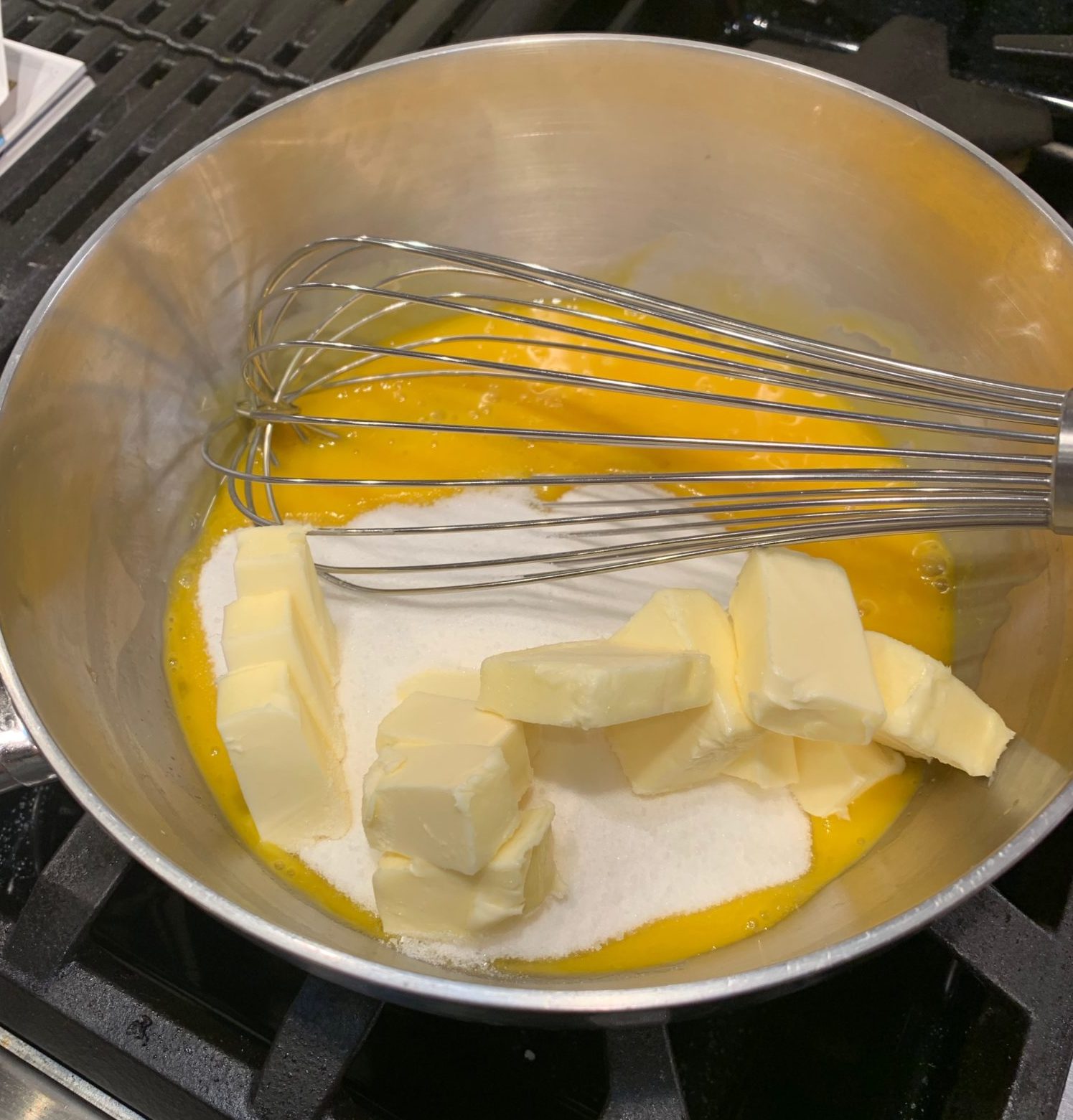 Stir it constantly until it thickens.  The mixture will  be ready when it reaches a temperature between 165-175 degrees. (The eggs will scramble when they reach 185 so keep an eye on it).  If you don’t have a thermometer you will be able to tell it is ready when you can  dip a spoon in it and run your finger down the middle of the spoon and it leaves a clean line. 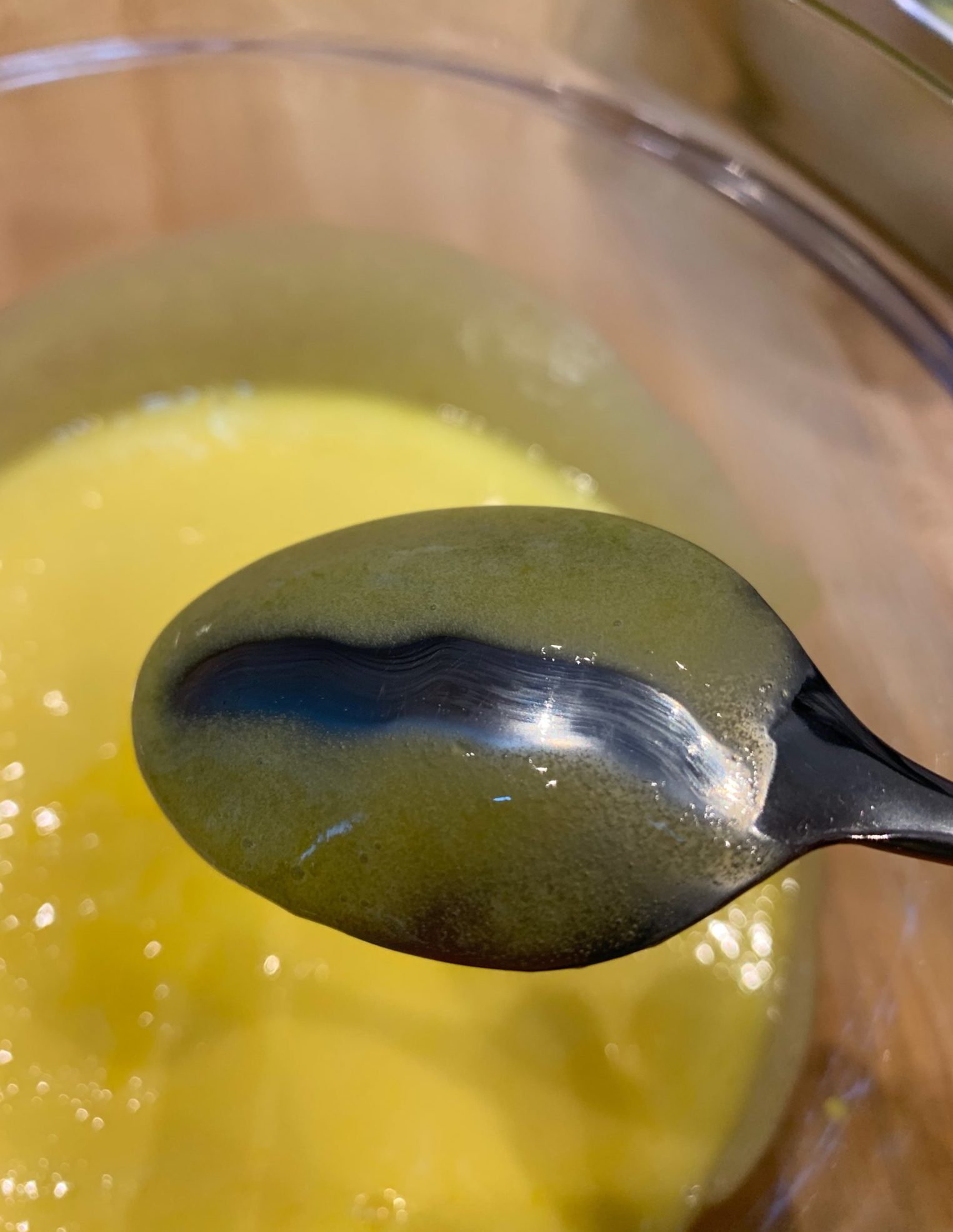 When done, the mixture will be thick enough to coat the back of a spoon and a line drawn through it will hold

Remove it from the heat and add all the other ingredients. 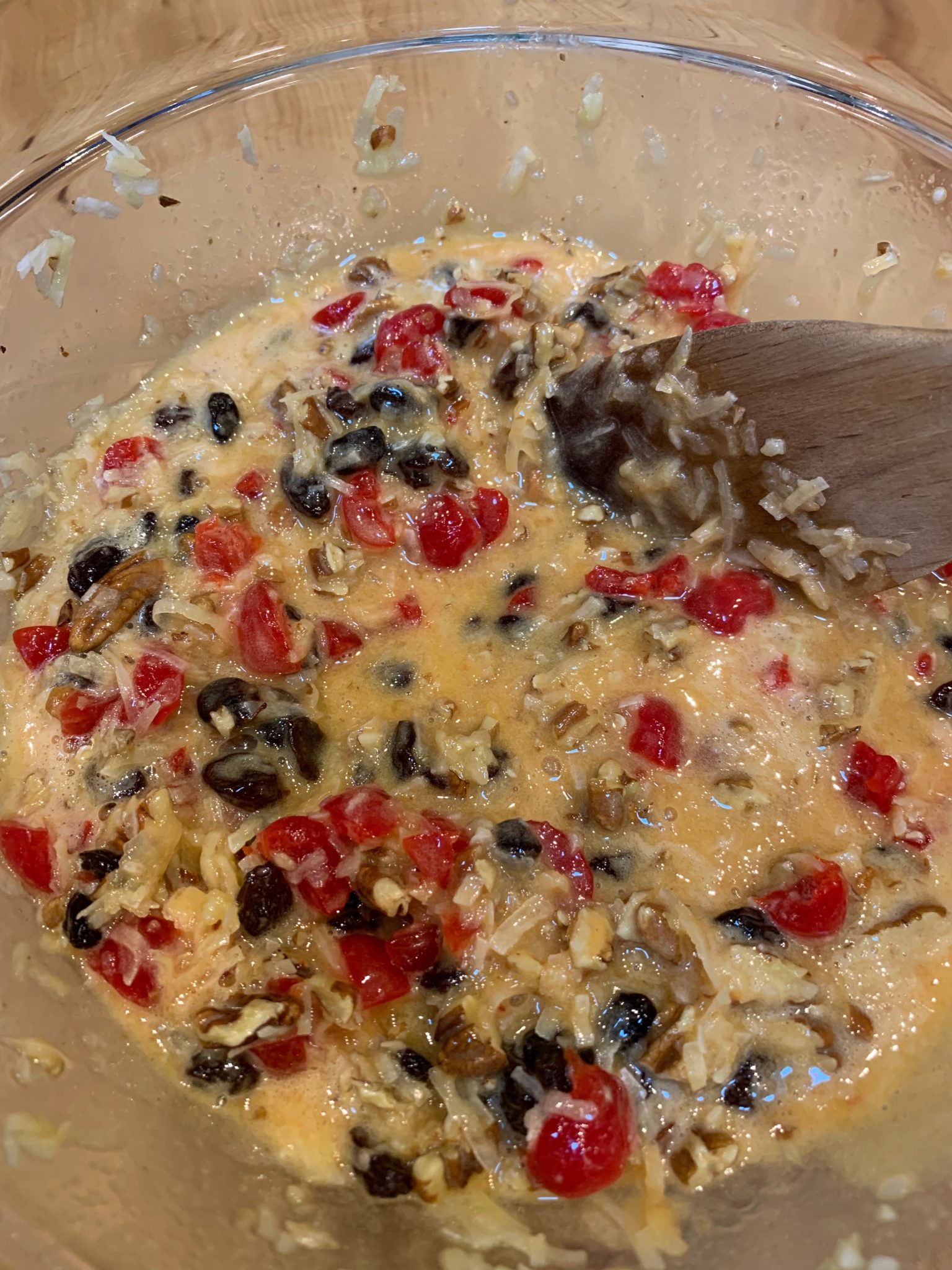 Let it cool completely in the refrigerator.

Spread the filling between the layers and finish with the top.

You can eat it right away or you can go old style and let it sit for a day or two in cool spot.  The filling will seep into the layers and make a lovely moist bite.  Either way, this is a great cake! 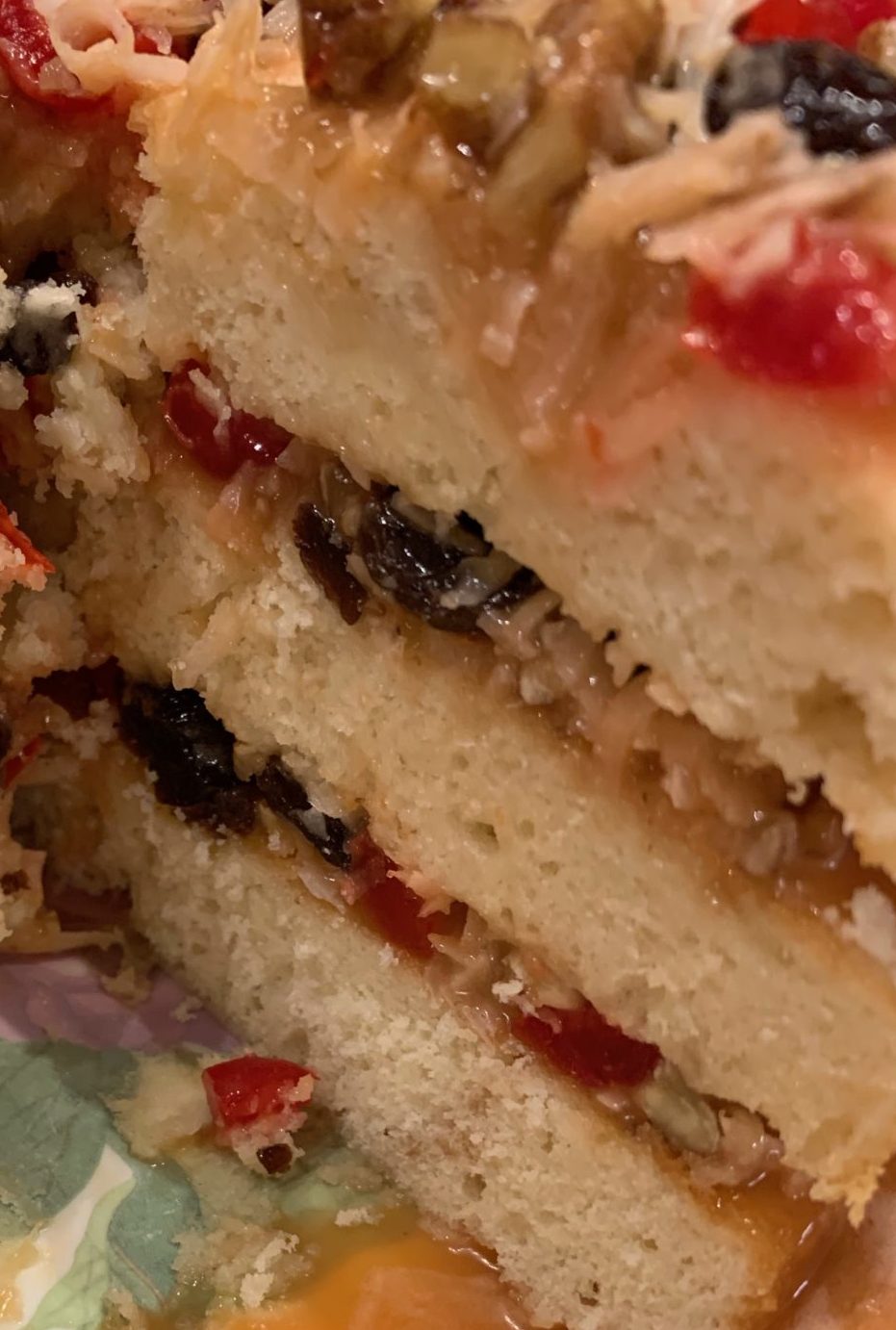 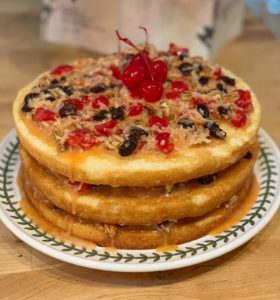 Assemble the cake by placing 1/3 of the mixture between the layers and finishing with filling on top.

The Lane Cake can be eaten immediately or allowed to “ripen” in the refrigerator for one or two days.