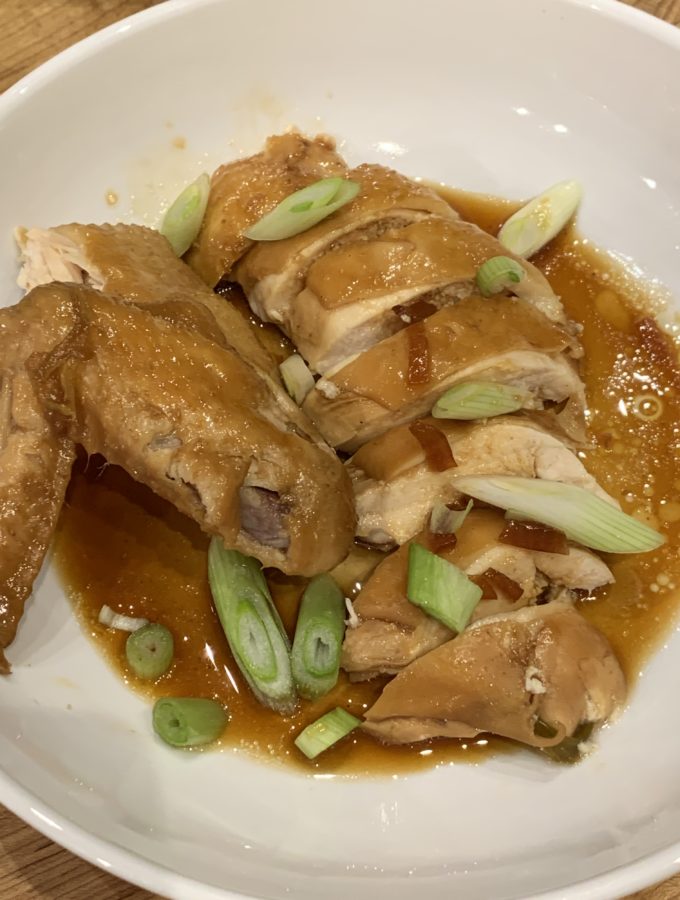 A whole chicken is poached in sherry, soy sauce and  Dr. Pepper along with Chinese spices for a dish that is reminiscent of the food courts of Singapore.

When I lived in Singapore, I would often go to the local “Wet Market” to purchase fruits and vegetables and other Asian products.  Located underneath one of the large public housing apartment towers near me, it was important to go early in the morning before it got too hot.  These markets are called wet markets because they clean the floors with buckets of water after they wash the fresh produce, and butcher and clean fish, chicken and pork.  As the heat and humidity of the tropical day rises it can get kind of ripe later in the day!

One of my favorite things to do was to stop at the food court which was located nearby.  The food courts of Singapore are like giant Chinese and Asian Restaurants where you can see the food being prepared at different stalls and pick out exactly what you want. You can eat it there at one of the tables provided or take it home for later.  They are a part of every housing development and almost everyone eats there at least once a day.

My favorite dish from the food court was Chicken Rice.  Chicken Rice is sometimes called the Singaporean national dish.  It’s nothing fancy, just chicken poached with Chinese herbs and spices and served with rice which has been cooked in the poaching liquid. Sometimes the simplest and purest dishes are the best.

The recipe that follows is not a classic Chicken Rice recipe.  It is a variation on it which uses Dr. Pepper, a classic American soft drink, along with Asian spices as a poaching liquid and sauce.

This recipe is for a whole chicken.  I have made it for myself using half a chicken and cutting the poaching liquid in half as well.

Prepare the chicken.  Clean it well and cut it in half by removing the backbone.  Then press it flat with your hand, breaking the breastbone but keeping the chicken whole. 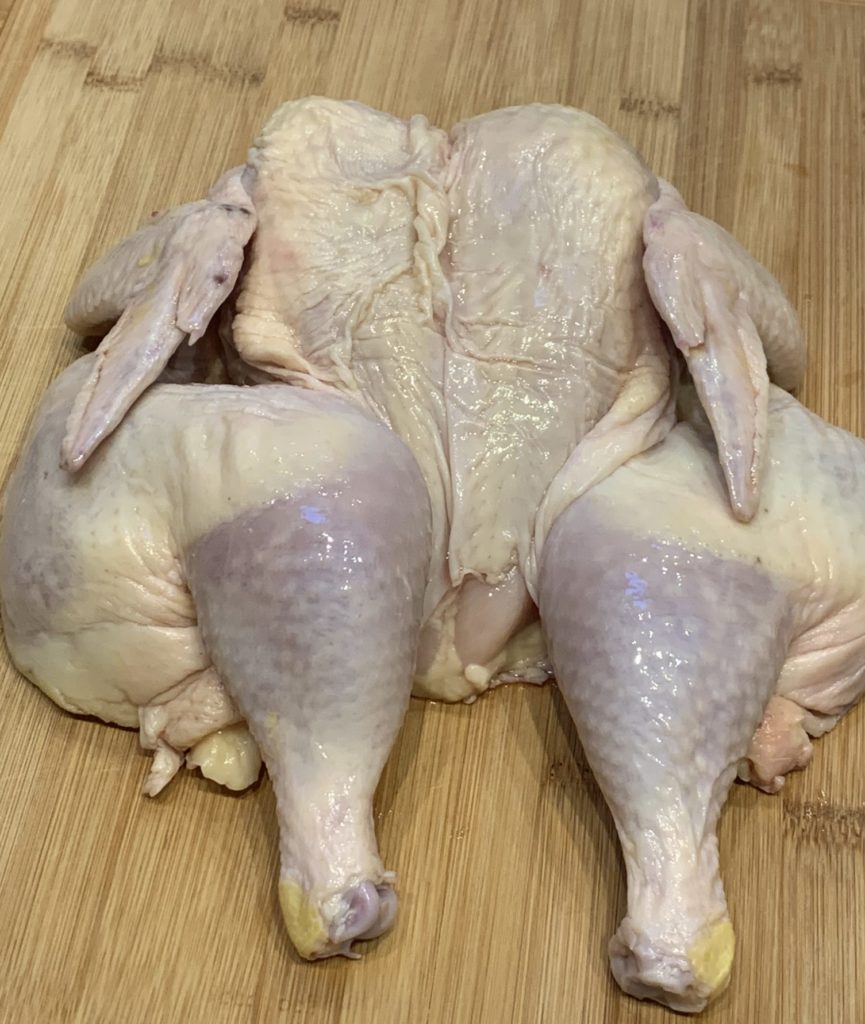 Chicken prepared this way is called “Spatchcock Chicken”. I have no idea why!

Prepare the spices by crushing them slightly. 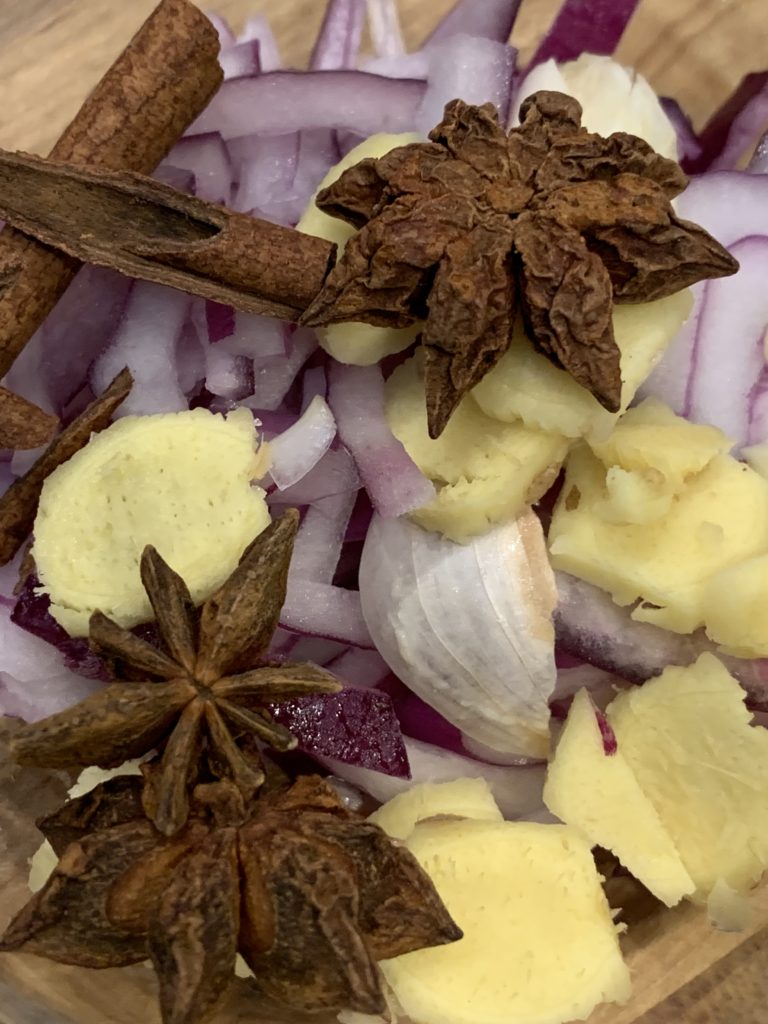 Slice the ginger thinly, crush the garlic and cinnamon before using

In a large pan or Dutch oven, heat some oil and cook the spices until they release their oils and smell delicious. 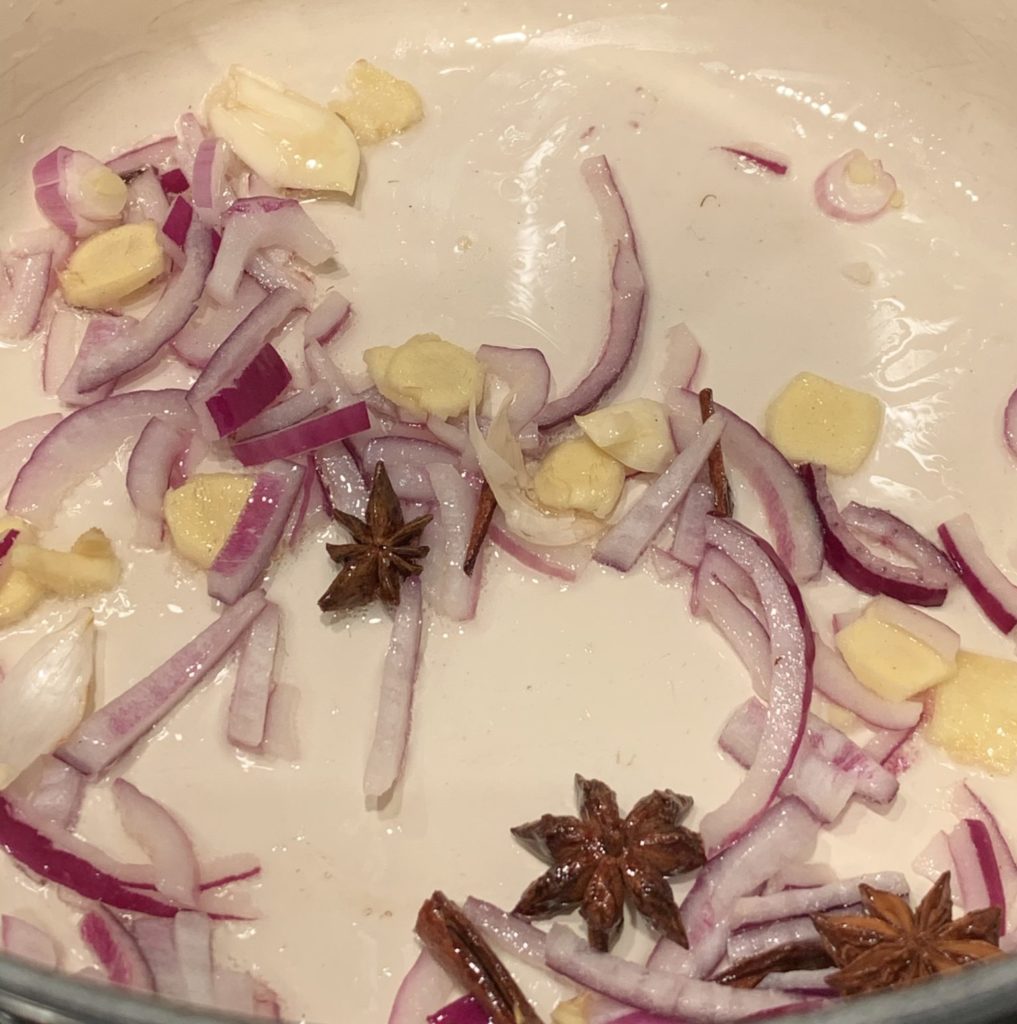 It only takes a minute or two for the spices to become fragrant. You will know when it happens!

Add the Dr. Pepper, some honey and Tamari sauce (or soy sauce) and water, along with some scallions.  Bring it to a boil and let it simmer until the carbonation is gone and the flavors come together, about 15 minutes.  Now stir in some dry sherry. 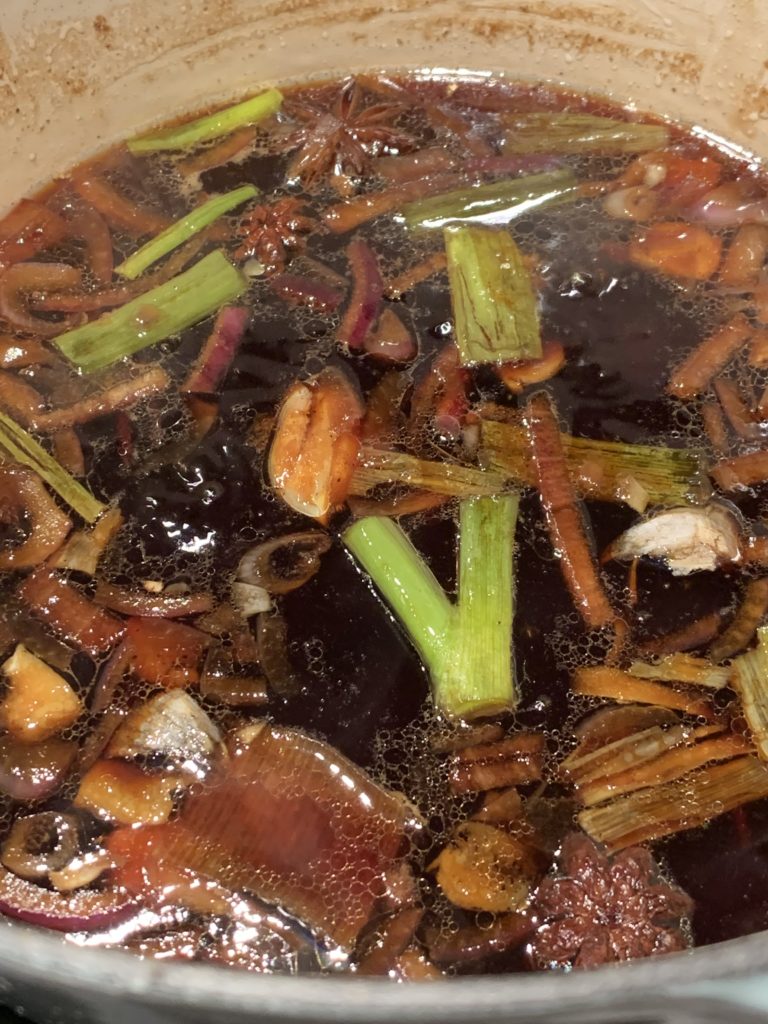 The mixture will bubble as the carbonation is released. Once this stops it is ready

Put the chicken in the poaching liquid, breast side up.  Bring it back to boil and lower the heat to a simmer.  Cover the pot and simmer the chicken for 10 minutes.

Turn the chicken over so it is breast down and simmer, covered, for a further 10 minutes.

Now leave the lid on and turn the heat off.  Let the chicken sit in the hot broth for a further 30 minutes.  Check the chicken for doneness with an instant read thermometer.  It should be at 160-165 degrees.

Carefully remove the chicken to a cutting board. It should be fall apart tender.

Cover it and let it rest while you bring the poaching sauce back to boil.

Boil the sauce for about 15 or so until it is somewhat reduced and slightly thickened.

You can serve the chicken over rice with some of the sauce or by itself.  I like to add some chopped scallions for the bite of flavor they bring. 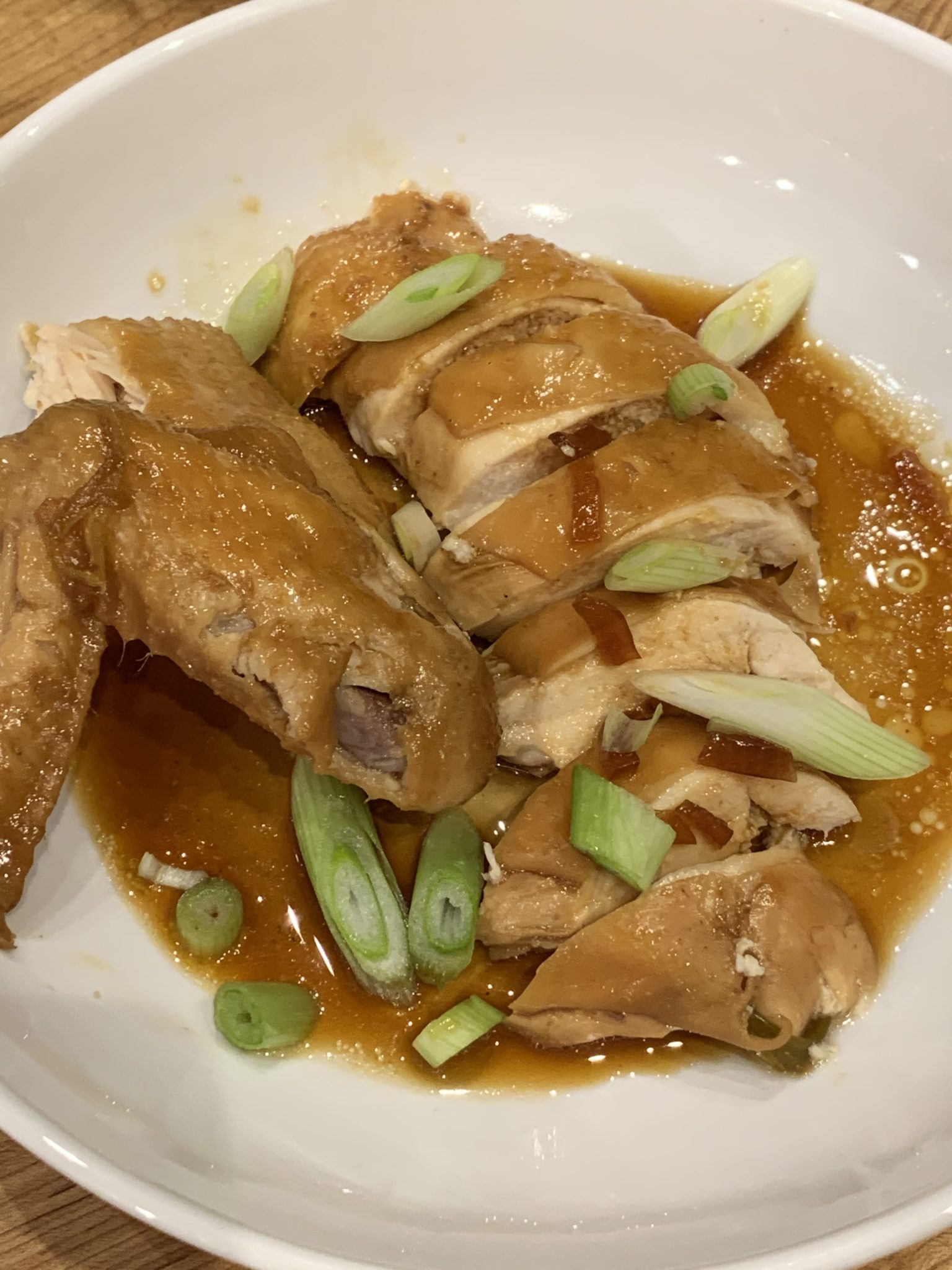 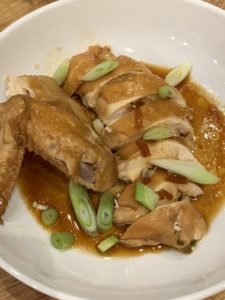 Note: chicken can be stored in the poaching liquid, tightly covered for 5 days in the refrigerator.