Subscribe to the Blog!
You are here: Home / Baking / ECLAIRS 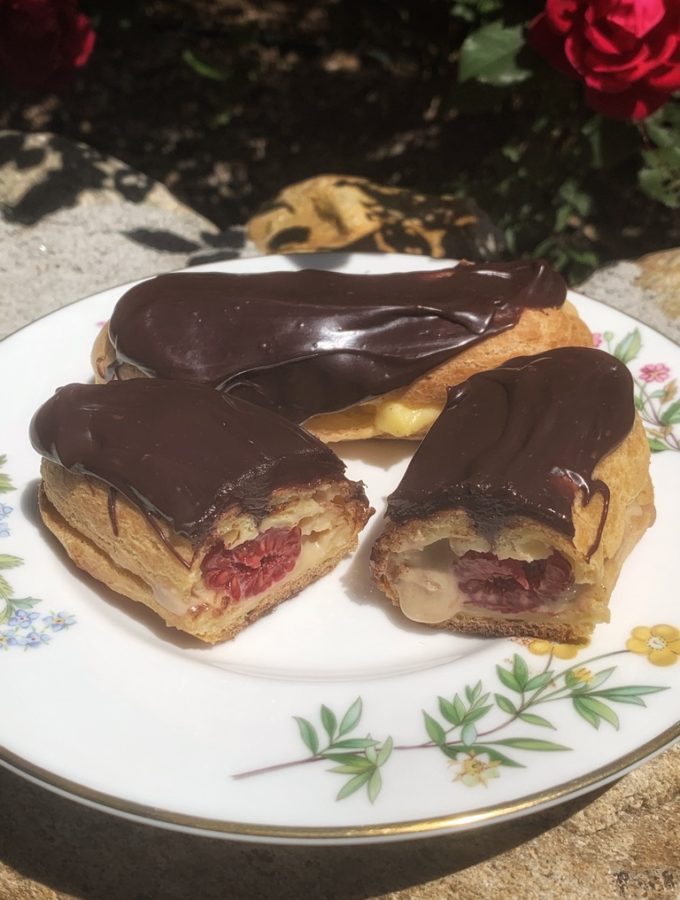 Crisp and airy pate a choux shells are filled with vanilla or raspberry cream then covered with luscious chocolate ganache for two takes on the Classic Eclair.

This is the year that time slowed down.

Spring creeps ever so slowly across the landscape.  Warm days are followed by cold and frost and my winter clothes have not yet rested safely in the back of my closet. Day follows day with extraordinary sameness broken only by the question of what the Great British Baking Show will ask me to make next.  Truthfully, it seems like that show will never come to an end either!

But it is coming to an end. Summer will follow Spring and contestant after contestant will be eliminated.  For me no elimination, not yet!  This week’s test, Eclairs, was a triumph for me.  I needed it.

On the surface, eclairs seem like a difficult task.  Pate a Choux pastry is piped into long strips and baked to a puffed golden brown, Crème Patisserie is piped into the cavities of the éclair shells and then they are topped with a thick coating of chocolate ganache.

I know that sounds like a lot and it sounds hard.

So first let’s put it in English.

Eggs, flour and butter are cooked together on the stove top and then finished in the oven to make a puffed shell.

Custard is thickened with some corn starch and spread inside the shells.

The shells are iced with chocolate icing.

See, not so hard.

The second trick is to think of each step as a separate recipe to learn and practice.  I definitely suggest you spread this out over a number of days.  The crème pat (as the Brits lovingly call it) can be made up to three days in advance.  The eclairs can be baked and frozen up to a month before needed. On the day you want to eat them, the ganache is a quick 10 minutes to make.

I made my crème pat first.

I  had decided to make two different fillings for my eclairs.  One would be the traditional vanilla crème patisserie and the other would be a raspberry flavored crème pat.

To do this, I first reduced some raspberries and a little sugar to a thick mixture and put that through a sieve to remove the seeds. 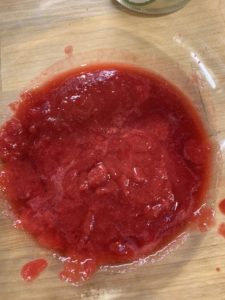 Putting that aside to cool I went ahead and made my crème patissiere.

I split a vanilla bean in half, scraped out the seeds and added both seeds and the bean halves to some cream in a small saucepan.

While that warmed slowly over a low heat, I separated three eggs, putting the yolks and one more whole egg in a bowl with sugar and corn starch.  And I beat that together until it was thick and smooth and a lighter yellow. 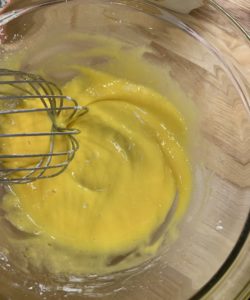 Beat the eggs, sugar, and corn starch until thickened

I turned the heat up and brought the cream barely to a simmer and then slowly added it to the egg mixture, whisking the whole time.  Go slow so that the cream doesn’t heat the eggs up too much and cook them.

Put the mixture back into the saucepan over medium heat until it thickens.  Let it finish cooking for a few more minutes and finally add some butter to it to give it a nice glossy rich finish.

Separate the crème patisserie into two parts and stir the raspberry puree into one half.  Lay some plastic wrap on top of the crème pat so it doesn’t form a skin and refrigerate until you need it.

On to the eclairs.

People like to make a big deal out of pate a choux.  I have made it many times and never had a problem.  Don’t let anyone get in your head.

Heat some water and butter together in a pan until the butter has melted and the mixture boils, add sifted flour (a trick is to use bread flour for this recipe) and stir the mixture together over the heat until it comes together in a bowl and leaves a film on the bottom of the pan. 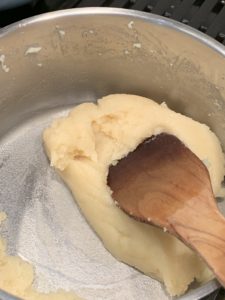 Remove it from the heat and using a mixer, or by a whisk, beat in eggs until the mixture gets shiny.  Test it by running your finger through the dough, the divide created by your finger should stand up firmly. 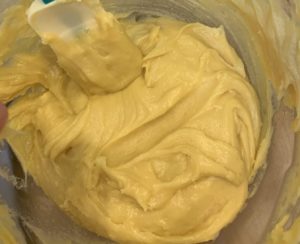 You will need to pipe the dough onto a parchment lined baking sheet but you don’t need a piping bag or tip to do this if you don’t have one.  You can use a gallon baggie with the tip cut off.

Pipe strips of pate a choux onto the paper, try and make the ends a little bit bigger than the middle, this will help them cook in a more even shape. Use a wet finger to smooth the ends and sprinkle them with a little powdered sugar for a nice finish. 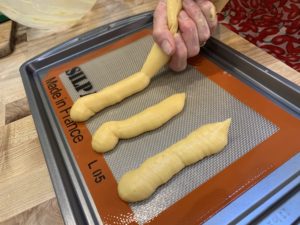 Bake the shells until they are puffed and golden, pricking them on one end ten minutes before they are done cooking and on the other end after you take them out of the oven.  Let them cool completely and freeze them or store overnight in an airtight container.  Before assembling the eclairs you may want to crisp them in a 350 degree oven for five minutes.  If you do, make sure they have cooled completely before assembling. 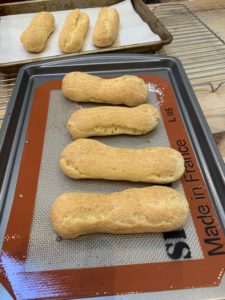 Making the chocolate ganache and assembling the eclairs

Heat cream until simmering and pour it over chocolate, corn syrup and butter in a bowl then stir until the chocolate has melted and it is thick and glossy.  That’s it! 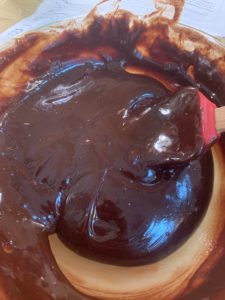 If you do have piping bag and tips, you can pipe the crème patisserie into the eclairs either through the ends or through three holes in the bottoms.  If you don’t have a piping tip it is perfectly acceptable to cut the eclairs in half and spread the vanilla cream on one half and then close it up.  The added bonus to the this method is that you can also put some fresh raspberries inside along with the raspberry cream. 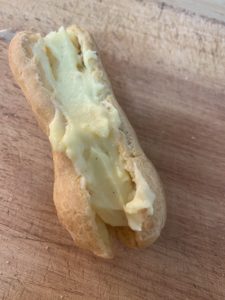 Spread a good amount of yummy Creme Pat in the eclair! 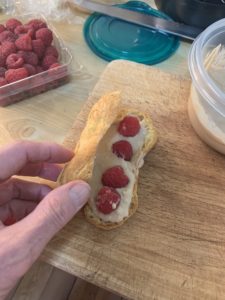 To ice the eclairs, you can spread the ganache on top with an offset spatula or pipe it on. 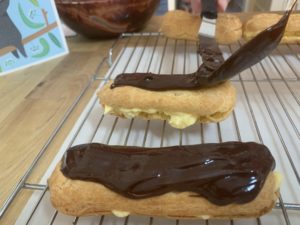 Let the chocolate set before serving.  The eclairs will keep at room temperature for about an hour.  If it will be longer than that, refrigerate them until needed.

Any extra eclairs (as if!) can be frozen on a cookie sheet and then put into a container for up to a month.  Defrost for an hour before serving. 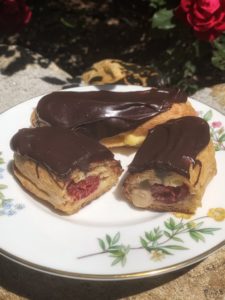 For the Pate a Choux

For the Crème Patisserie

For the Chocolate Ganache

Make the Pate a Choux Eclairs