Subscribe to the Blog!
You are here: Home / Baking / DONUT JOY: MAPLE GLAZED WITH BACON OR CHOCOLATE GLAZED WITH NUTS? 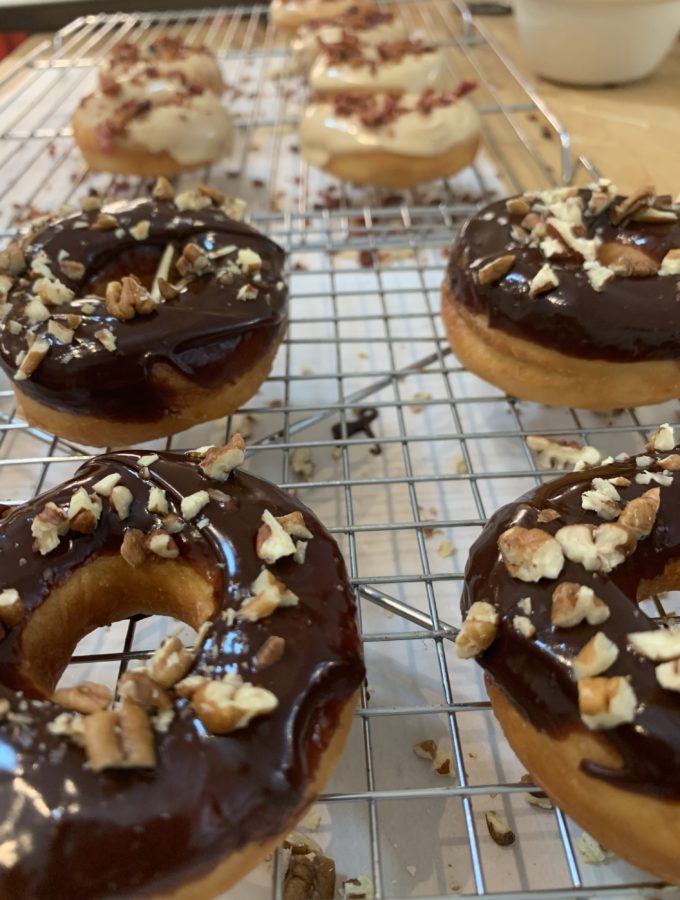 In the beginning, donuts came in three varieties: filled with strawberry jam, coated in powdered sugar or sparkling with bright crystals of cane sugar.

My favorite was, and still is, the jelly donut.  Its soft pillowy exterior hides a blob of sticky red jam making each bite an adventure. Sugar donuts are also a favorite. When I was a child, my mother would cut the centers out of Pillsbury Poppin Fresh Biscuits, fry them and toss them in cinnamon sugar for a treat.  (You can still do this.  It’s a quick and easy route to a fairly good donut)
As for my children, they played a game, seeing who could eat a powdered sugar donut and go the longest without licking the sweet white sugar off their lips and cheeks.

Then Krispie Kreme entered the game.Our summers in the South always included the classic Krispie Kreme, a fried donut dipped in a sweet sugar glaze and topped with nuts, chocolate or colored sprinkles among other things. And when Krispie Kreme expanded their shops to the rest of the United States, donuts moved from breakfast treats to sweet desserts.

Mind you I am not complaining.  Just observing.

This week, as you have surely guessed, the Great British Baking Show Challenge is Donuts.

Make a dough.  Warm milk, a little sugar and yeast are added to a mixture of eggs, more sugar and butter in the bowl of your mixer.  Stir in the flour and when it is mixed in switch to the dough hook.  Let the mixer do its work for five minutes.  Add flour by the teaspoonful until you have a good looking ball of dough.  Adjectives that come to mind are smooth, elastic, slightly tacky and stretchy. 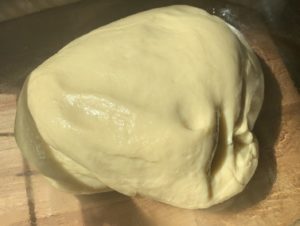 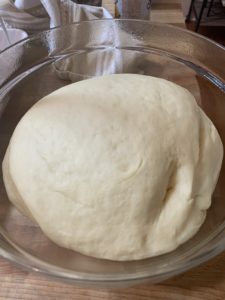 Let it rise to double in size, then roll it out into a large rectangle ½ “ thick. 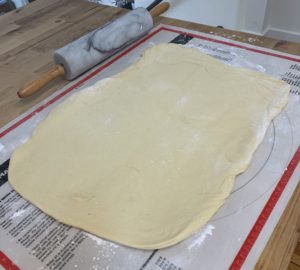 Roll out the dough on a lightly floured board

If you have donut cutter, now is the time to use it.  If not, a round cookie cutter will do.  Cut out circles and then use a smaller round cutter to cut out the centers.  If you don’t have a small cookie cutter, use a sharp knife to cut small circles in the donuts.  Gather any remaining dough together, roll it out and cut some more.  You will have 12-24 donuts depending on the size you cut them.

Put the donuts on a parchment lined tray, cover them and let them rise again until puffed, 40-60 minutes. 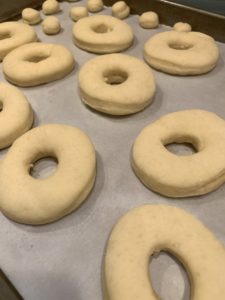 Let them puff up to a good height

During the last fifteen minutes of rising time, make your glaze(s) and topping ingredients.

I made two donuts: a maple glazed bacon topped donut and a chocolate glazed donut with chopped pecans.

Heat 2” of oil in a large Dutch oven to 350 degrees. It really helps if you have a thermometer, either an instant-read or a sugar thermometer.  You will want to maintain this temperature in order to get a good color on the donuts. 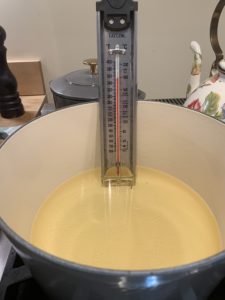 You don’t need a fancy thermometer like this. An instant-read will do just as well

Fry the donuts in small batches, turning them once.  They take about 2 minutes on a side.  Remove them to a paper towel to drain until they are all cooked.  The holes will cook faster and usually will flip themselves over when the first side is done. 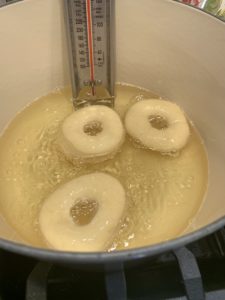 Keep an eye on the temperature and flip the donuts when you can see a line of brown around the middle. 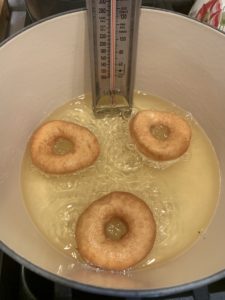 Finally, dip each donut in the glaze and sprinkle on the topping while the glaze is still wet.  I only glaze the tops of my donuts but you can do both sides if you wish. 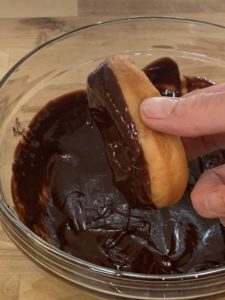 You can dip one side or both. Put the donut on a wire rack to dry. 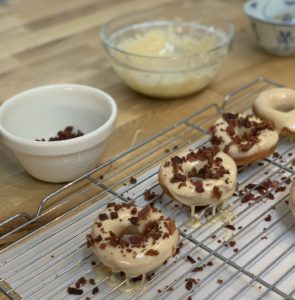 Sprinkle on the topping while the glaze is still wet.

The donuts will keep for a day or two but are best on the day they are made. 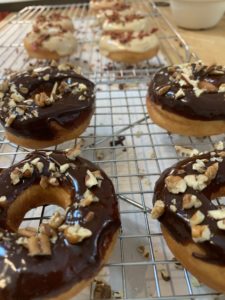 For the Maple Glaze

For the Chocolate Glaze

The donuts are best eaten the day you make them but will keep in an airtight container for a day or two.

I wish you could smell this Vietnamese Stew with L