Subscribe to the Blog!
You are here: Home / Main Courses / I LOVE FALL: APPLE AND SAUSAGE STUFFED ACORN SQUASH WITH BACON 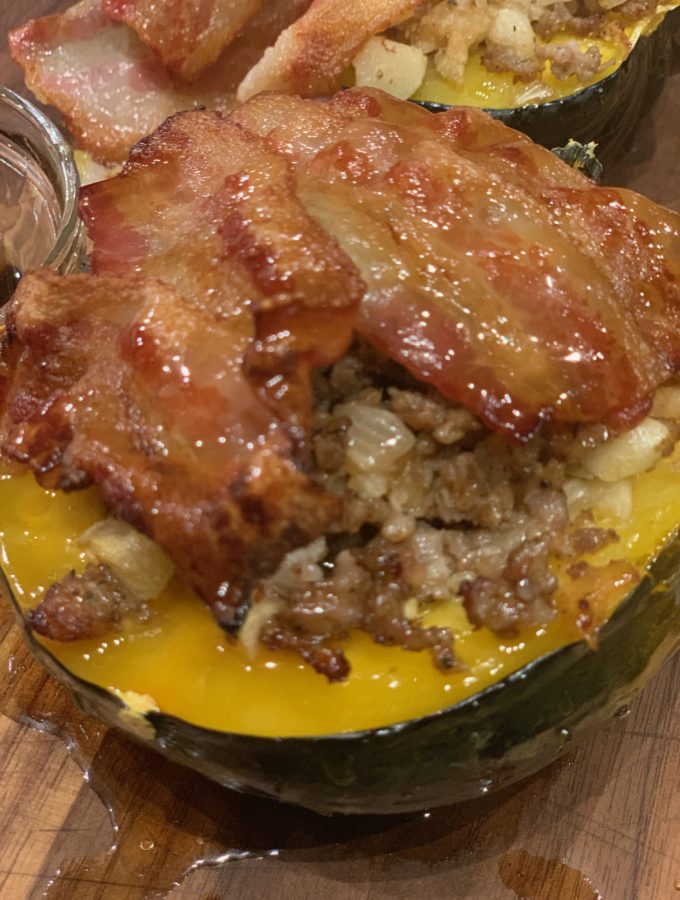 Acorn squash is roasted then stuffed with an apple, onion and sausage mixture.  It is finished with a layer of bacon and cooked until the bacon is crispy.  Once removed from the oven, the bacon is brushed with maple syrup for a satisfying Fall dinner.

I love September.  I love the clear blue skies, the gradually cooling nights, the lingering touches of Summer, and most of all I love the food.  Even when I lived in the tropics, September turned my mind to comfort food.  Melted cheese, soups, winter squash and stews.

Now that I am home in North Carolina, I am free to indulge in all things Fall.  Last weekend I went apple picking at a nearby orchard. As usual, this resulted in bags of apples to be gifted to my friends and family as the fun of picking apples in no way equals my ability to eat them. 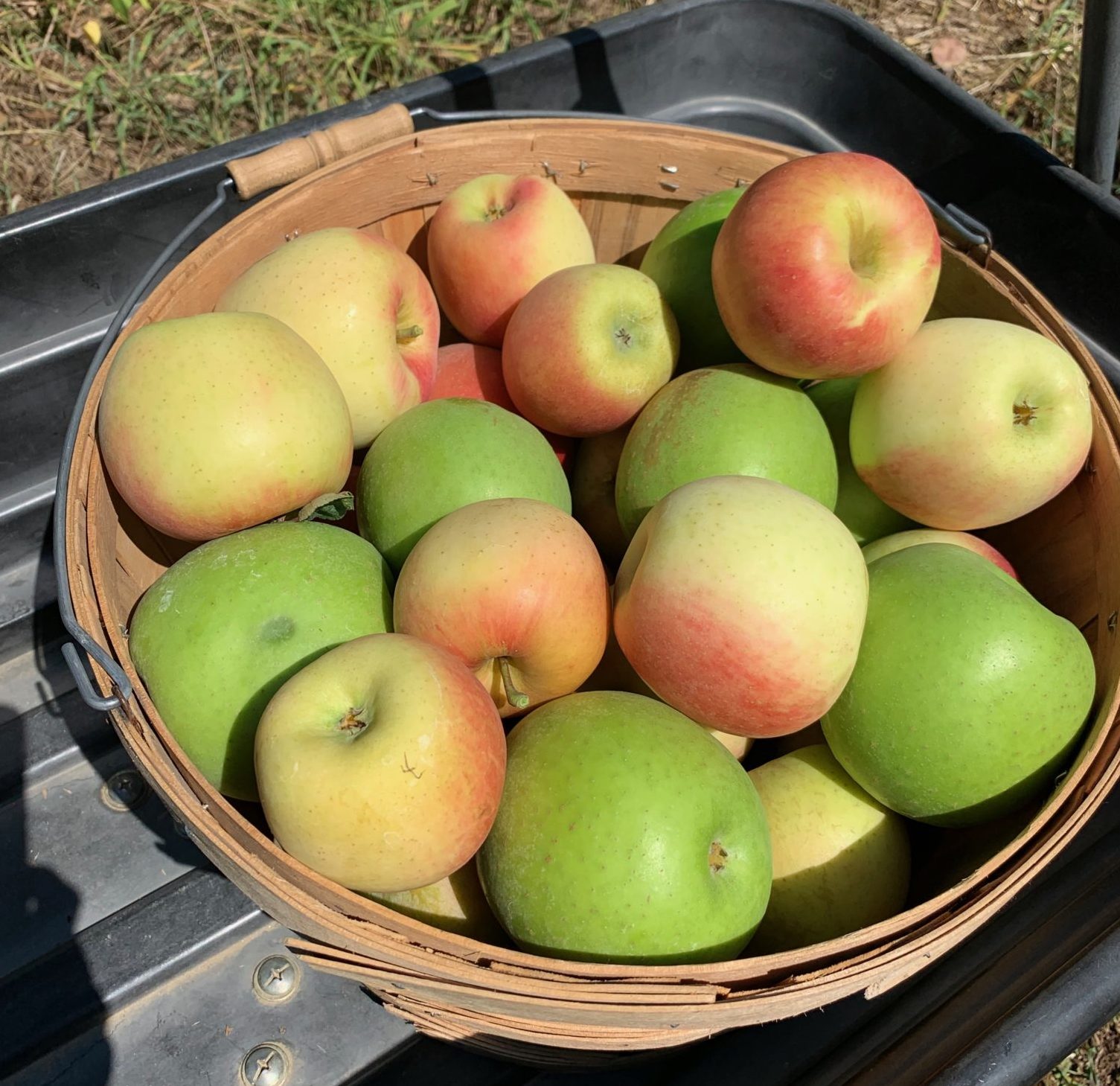 On Monday, I got out my decorations.  I love the way a few seasonal touches refresh the feel and look of my house.  And I was super stoked to receive the first of my Decocrated Subscription Boxes.  If you like to decorate for the season, you should check them out.  I am really impressed by the quality of the items in my first box. 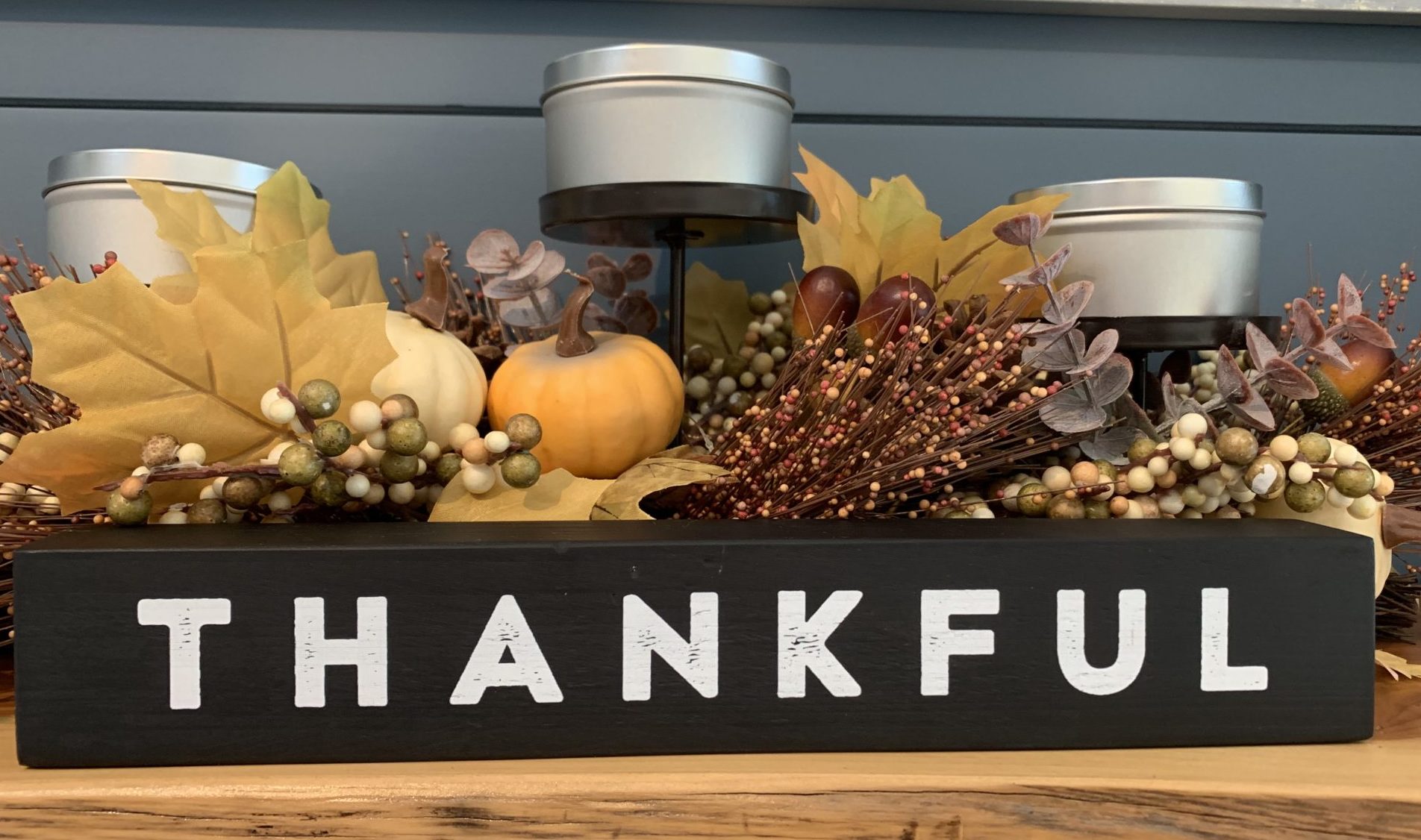 And then I went to the store and spent a lovely time walking through the aisles enjoying all the produce and foods of Autumn on display. 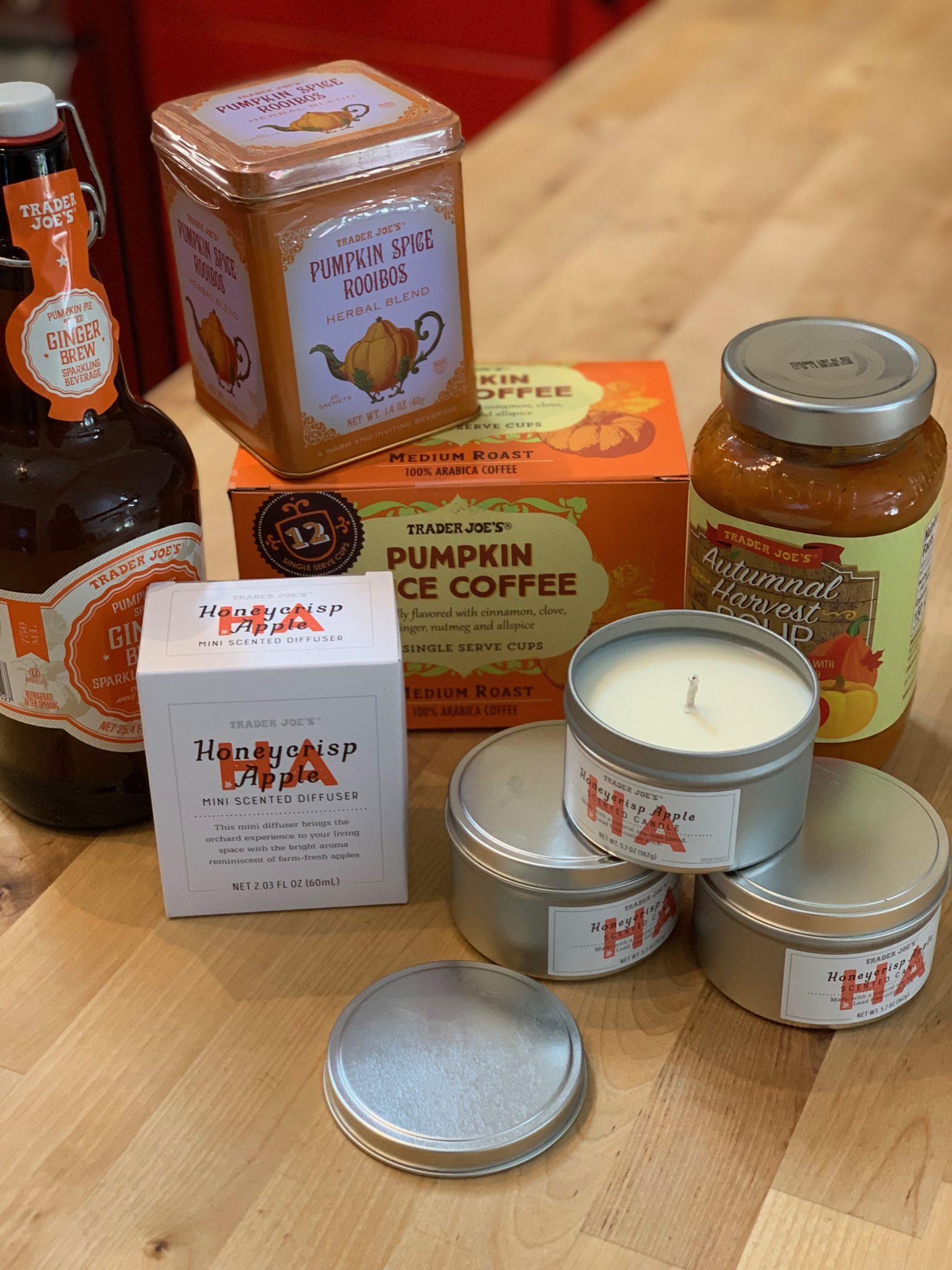 There are three supermarkets near me–so I have a pretty large range of seasonal items to choose from. But Trader Joe’s is one of the best!

After all of that I came home and made my dinner: Apple and Sausage Stuffed Acorn Squash with Bacon. It was so delicious I decided I had to share it with you!

First, slice the squash in half lengthwise and remove seeds.  Add about 1 inch of water to a rimmed baking tray and bake the squash cut-side down for 40 minutes. 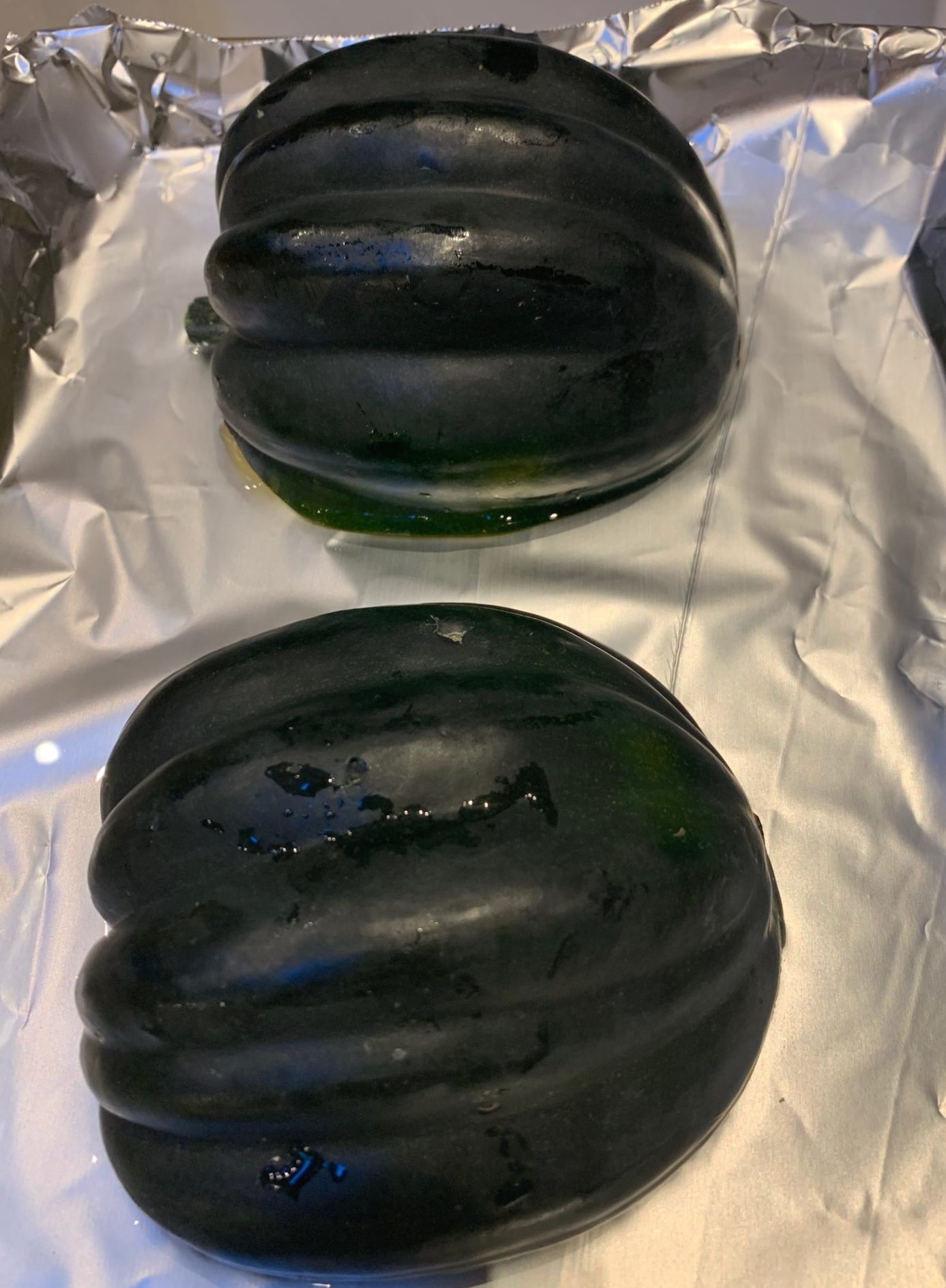 While the squash is cooking, prepare the filling.  Sauté some good quality Italian sausage meat in a frying pan.  Break the meat up with a fork and don’t stir it too often until it starts to get brown and a little crispy.  Use a wooden spoon or spatula to scrape up the brown yummy bits. 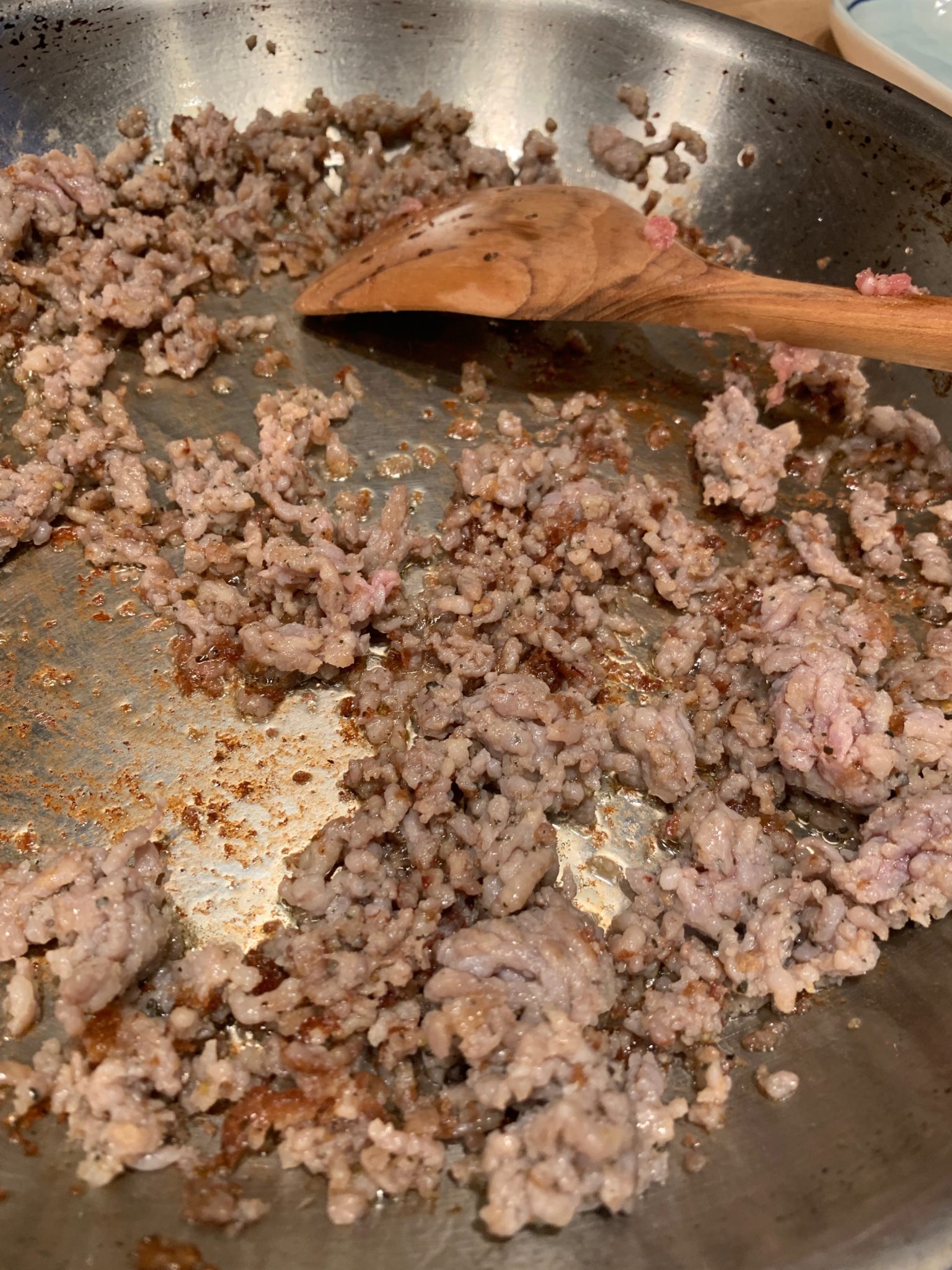 The crispy browned bits are the best part!

Remove the sausage from the pan and add a little oil then add some apples and onions. Cook them until the apples are soft and the onions are translucent. 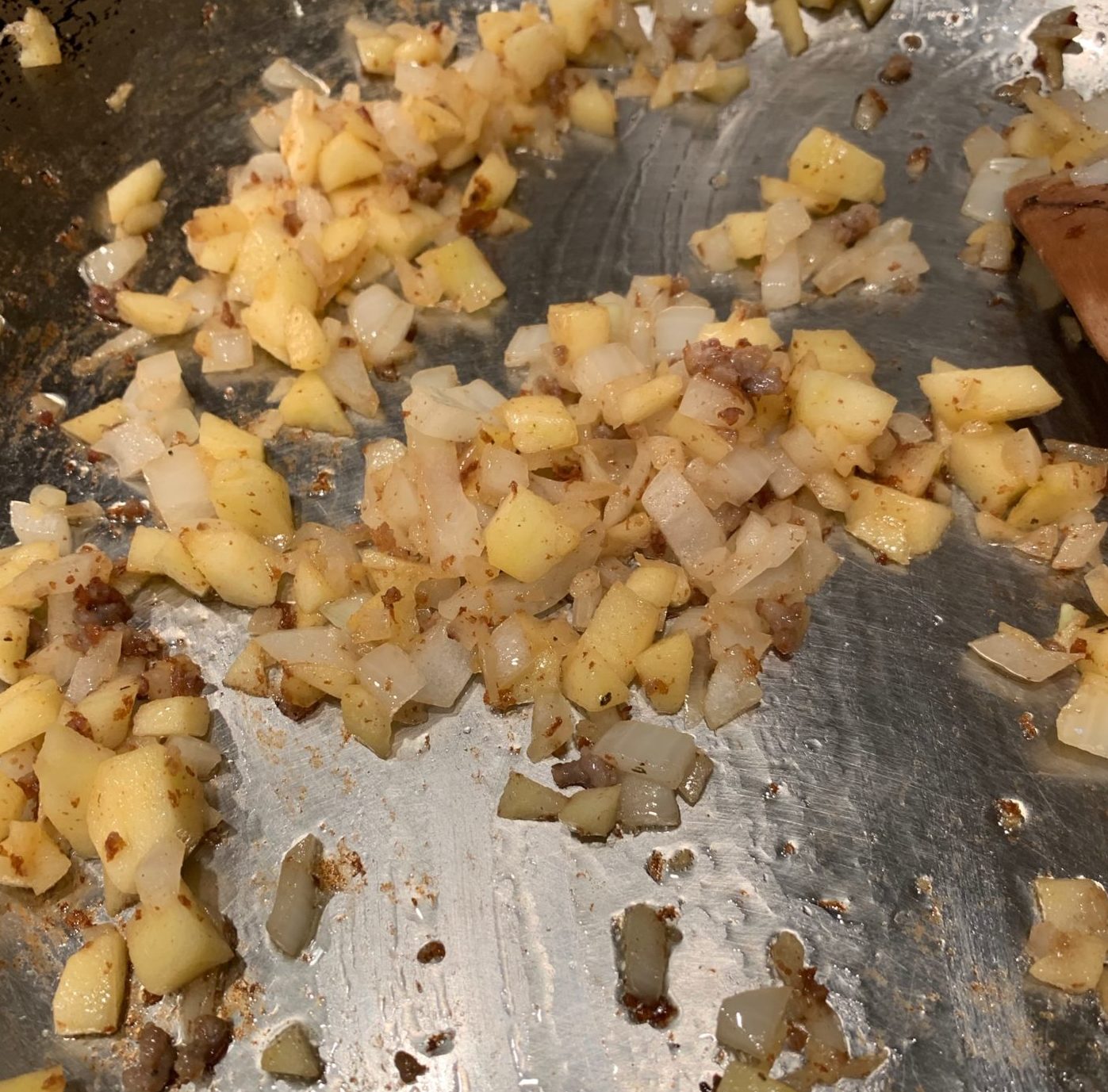 Now put the sausage meat back in the pan and season the whole thing with some salt and a touch of cinnamon.  Set this aside until the squash is ready.

Once the squash is soft to the touch take it out of the oven and turn it cut side up on the pan. Turn the oven up to 425 degrees.

Fill the cavities in the center of the squash with the apple-sausage mixture, really mounding it.  And now the best part!  Bacon!

Cut two slices of bacon/per squash in half and layer them over the sausage stuffing. 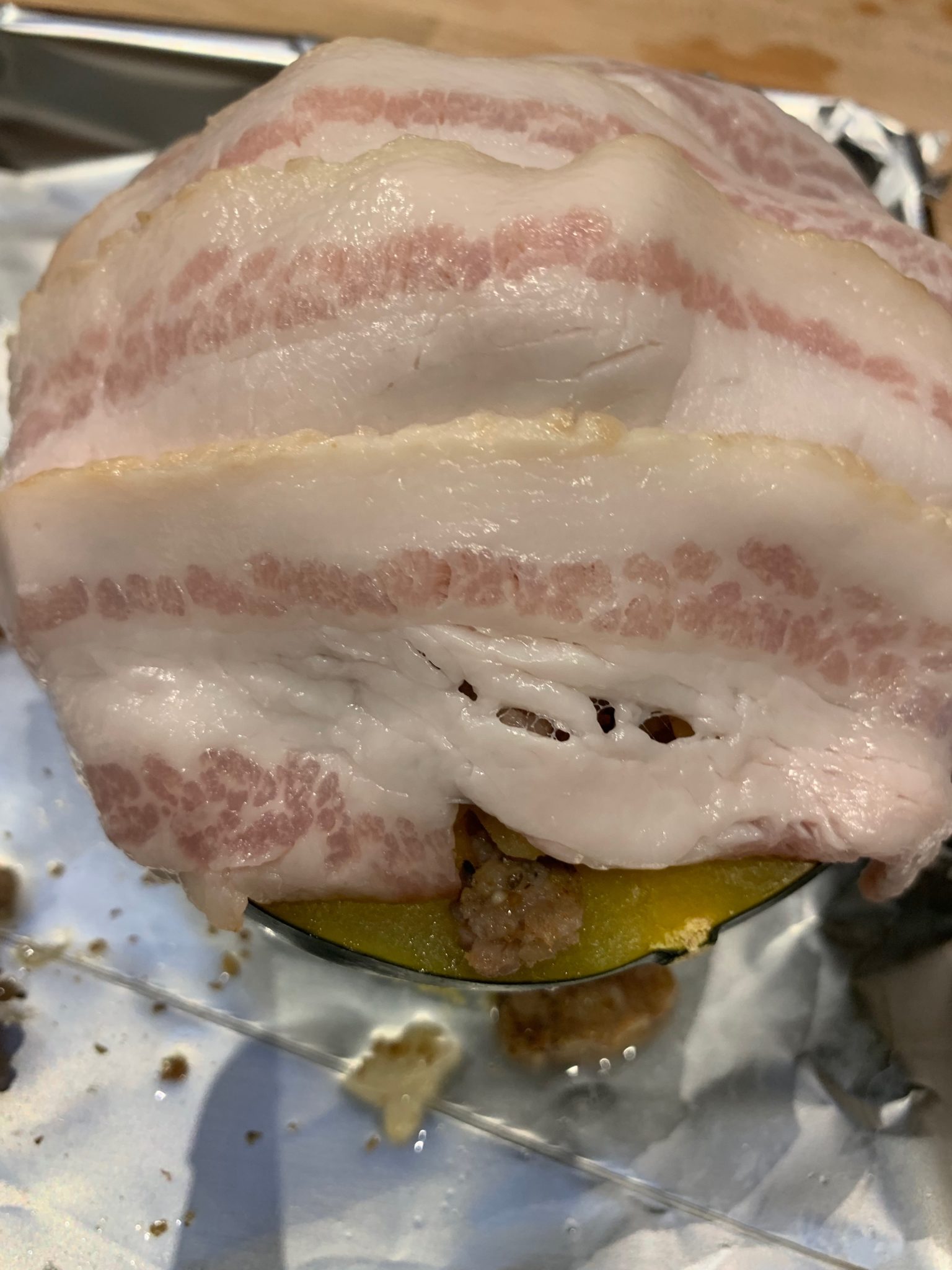 Put the squash back in the oven and cook it until the bacon is the way you like it. (For me, that’s crispy!).

Put the finished squash on a plate and brush the bacon with some maple syrup.

And there you have it, Fall on a plate. 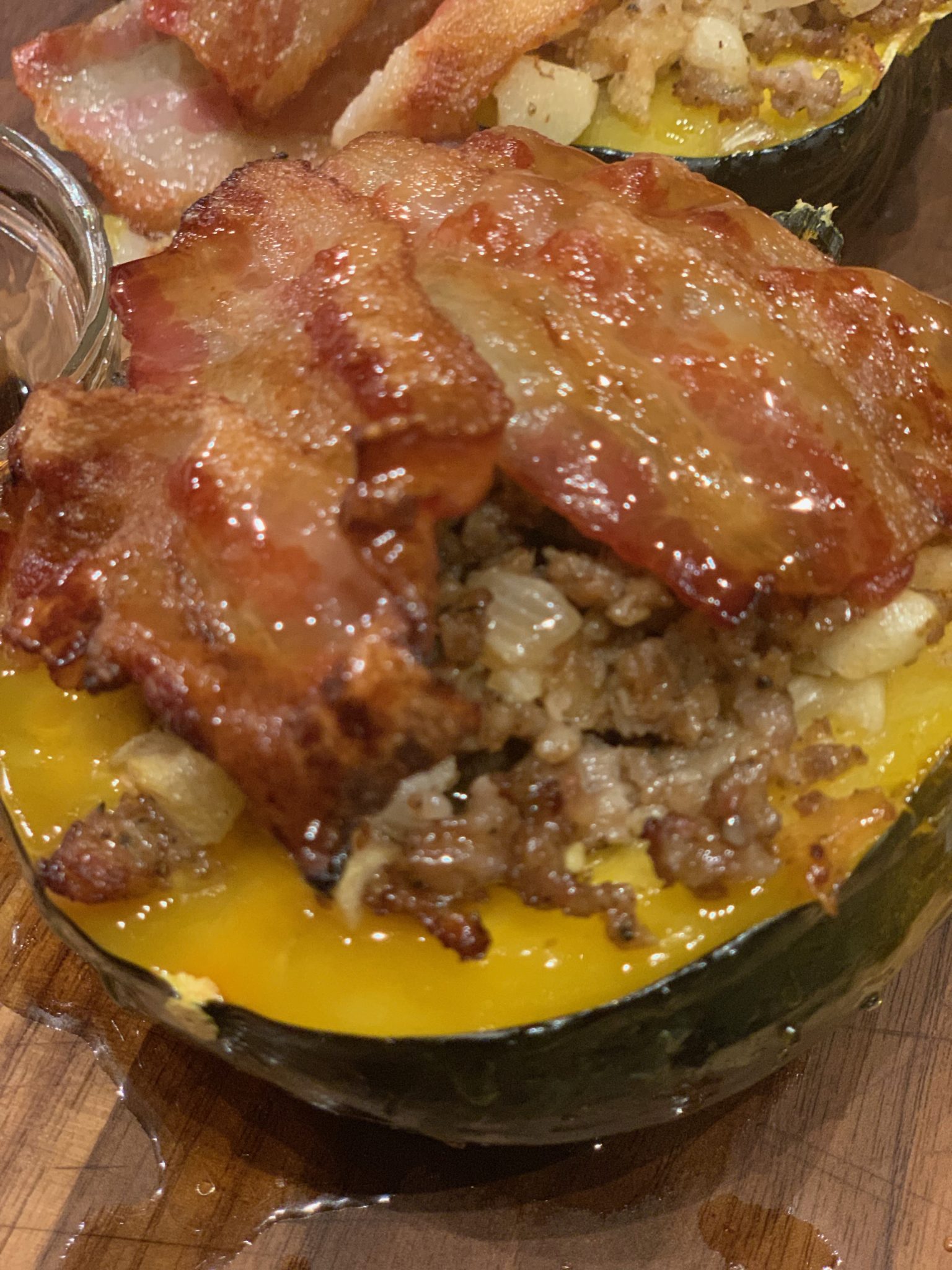 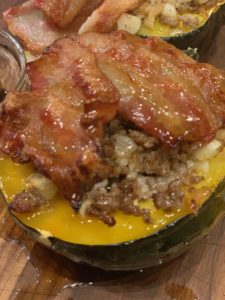 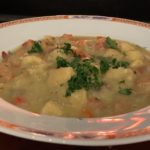 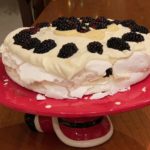 Proving that it is possible to cheat without going too far astray! @rezazasheville Mediterranean restaurant, this Moroccan Tagine is full of vegetables, beans and pulses while going light on the couscous (Wheat! I know). The Tempeh added another texture and dimension,although not really needed while bits of dried apricot, raisins and black olives added pops of flavor. And yes, I did have a glass of wine. Today it’s back to business! #cheatdaymeal #mediterraneandiet #yolo #awomancooks
.
.
.
.
#tagine #pulses #eatingwell #theartofeatingwell #fixitwithfood #rezazasheville #foodforfuel #tajine #tajinemarocain #morraccantangine #nutritiousanddelicious #januaryreset #ashevillefoodie #ashevillefoodies #ashevillereataurants ... See MoreSee Less