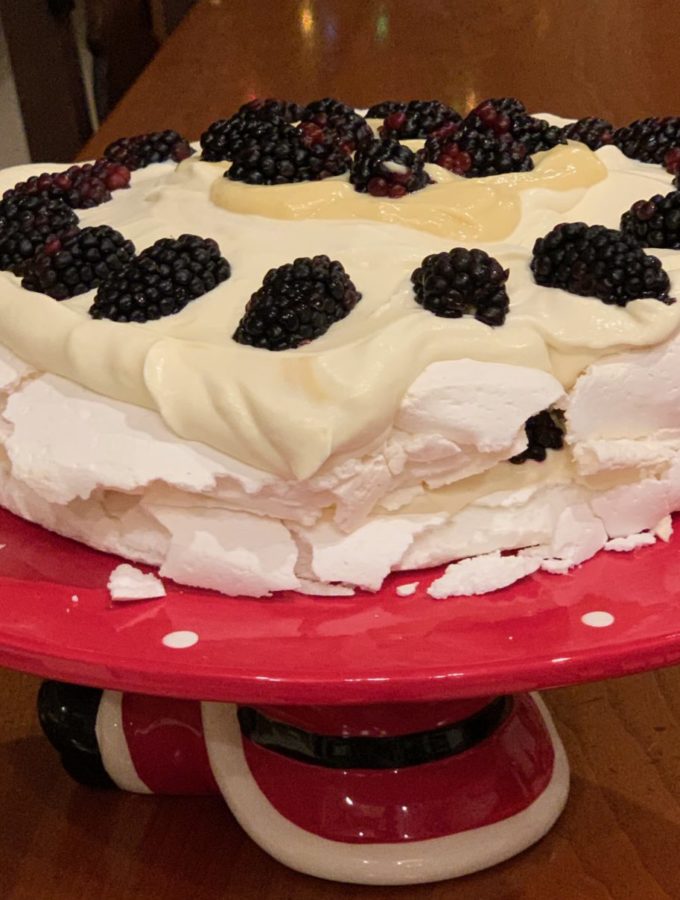 A crisp meringue shell with a pillowy interior forms the cake layer for this version of Pavlova, topped with custard laced with Bailey’s Irish Cream, Blackberries and Raspberries

I have a quandary.

I want to give you a great recipe for a show stopper dessert for New Year’s Eve (or any time for that matter) but I am still working on it.  It’s at the point where it tastes amazing but it looks meh.

What to do?  I am making it again today and I think I’ve got the appearance issue solved but it won’t be ready until tomorrow night (New Year’s Eve) and where will that leave you?

Are you up for a challenge?

Can I give you all the basic pieces and some suggestions for how to put it together?   I mean, why not?  In essence that is what cooking is all about: using basic building blocks to create wonderful dishes and desserts.

I think we can do this.  Check on my Instagram today and tomorrow to see how mine is progressing!

Let start with the meringue.

Pavlova is an Australian dessert invented to celebrate the Russian Ballerina, Anna Pavlova, on the occasion of her 1920 tour of the two countries.  It consists of one or two meringue layers topped with fruit and whipped cream.  For our topping we are going to ramp it a bit from the usual whipped cream but for the meringue layer nothing needs changing–crisp on the outside and marshmallow soft inside it’s already perfect. 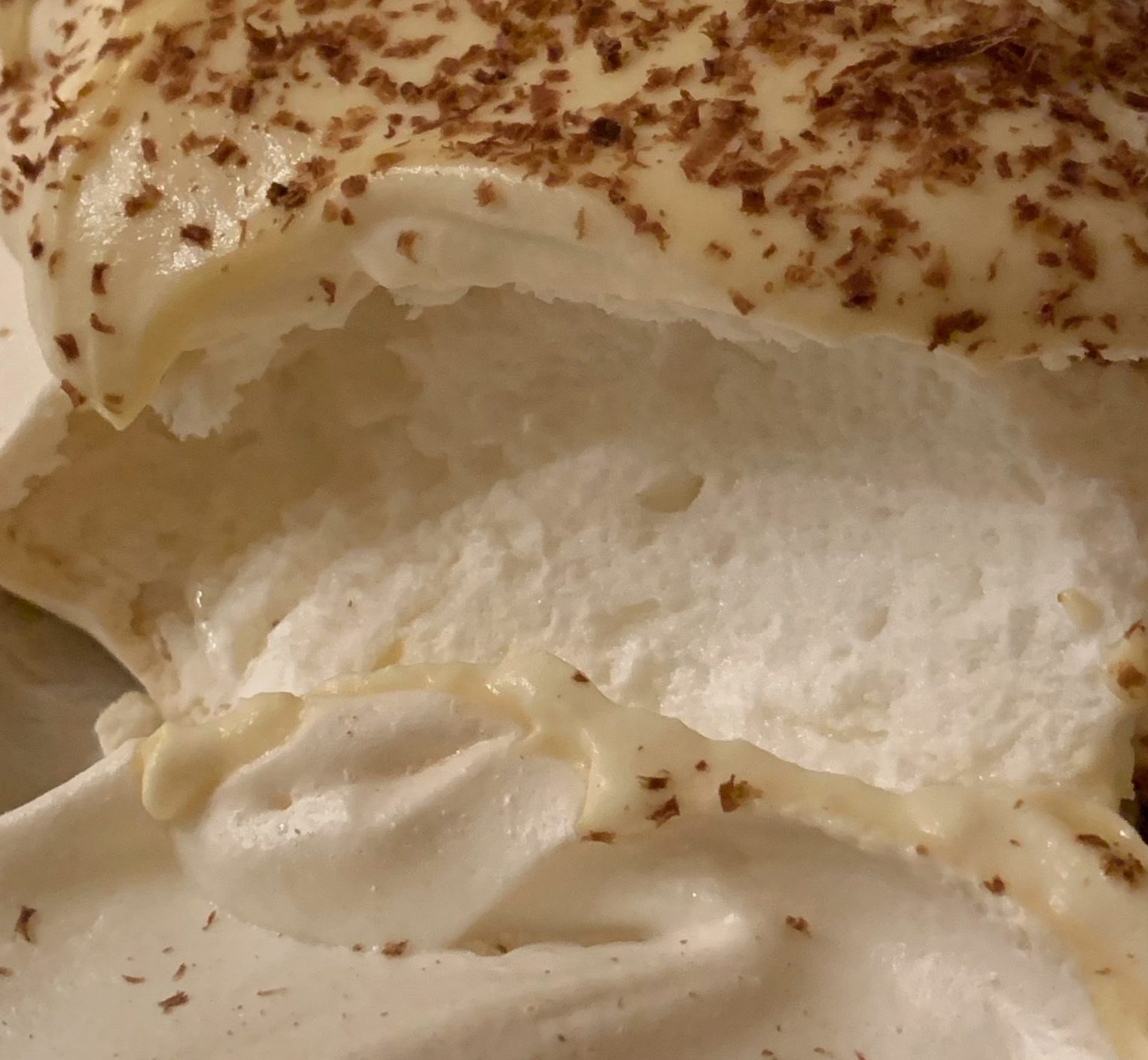 The meringue for a Pavlova has a crisp out shell and a pillowy, marshmallow-like interior

To achieve this, I turned to an Australian recipe of course! Always go to the source.

Eggs whites are beaten until they form peaks which hold their form when the beaters are lifted and then sugar is added slowly. 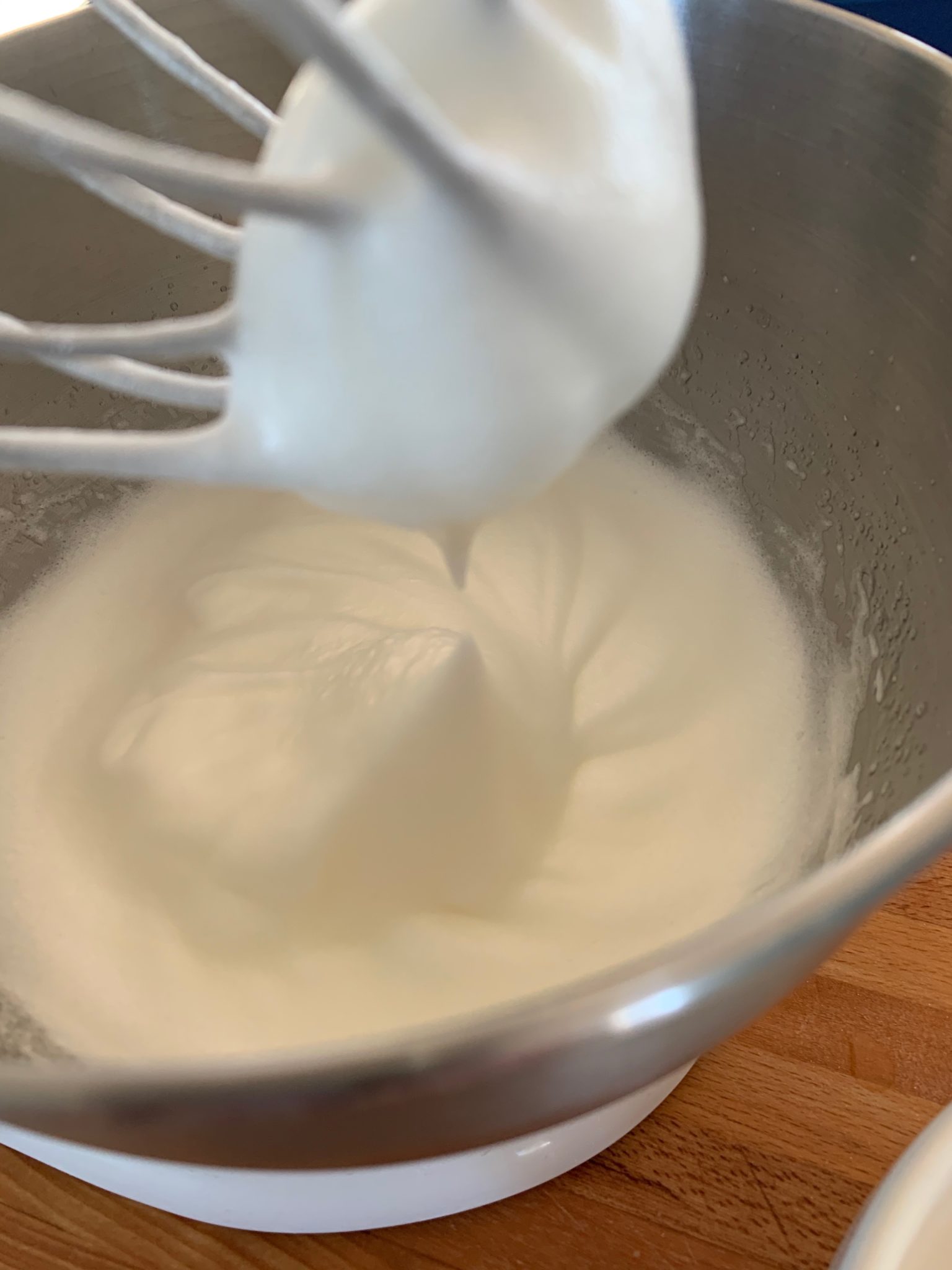 Once all the sugar is beaten in, we add some vinegar and cornstarch.  The vinegar helps the crust form and the cornstarch stabilizes the meringue, helping it to form the pillowy inside.

You can make the meringue in one layer or two.  Prepare a baking tray by greasing it lightly.  Draw a nine inch circle on some parchment paper and place the paper ink side down on the baking tray.  The grease will stick the paper to the tray which is a big plus when putting the meringue down.

My first Pavlova I used one layer which look great until I put the topping on and then it became a little one note. 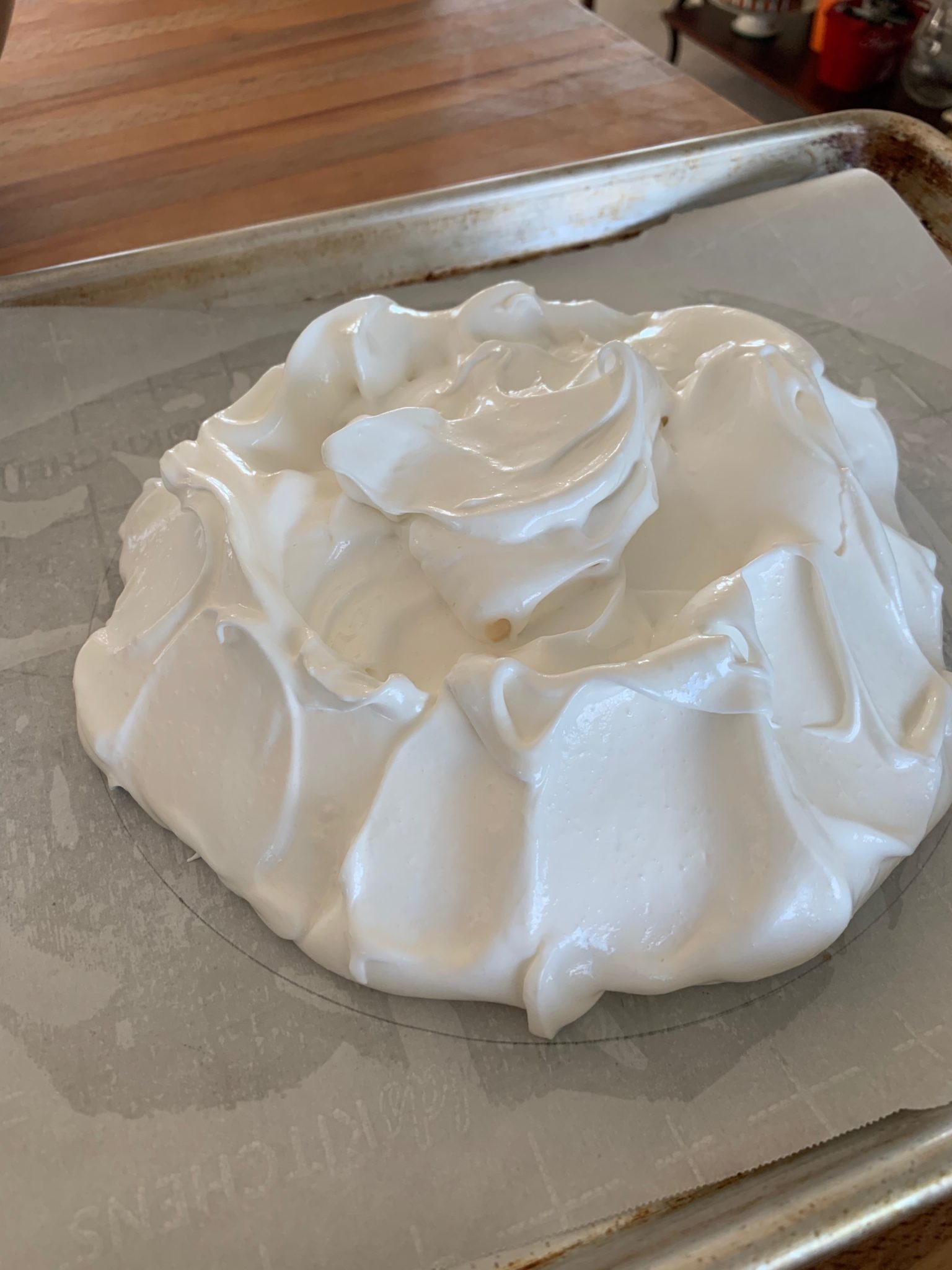 If you are making a single layer, use your spatula or knife to give definition to the sides

So this time I am going for two layers. Piping the meringue onto the paper results in a cleaner looking meringue but since they will be covered with whipped custard, it’s not terribly important! 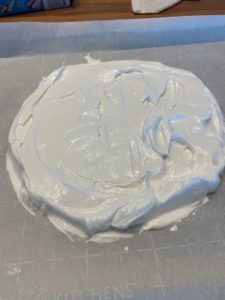 Once they have cooked, turn the oven off and let them cool in the oven with the door ajar.

You can make the meringues the day before, just wrap them well and keep them in a dry place until you need them.

On to the custard.

Custard can be a little daunting.  I have spent hours stirring my custard over a very low heat and it never seems to get thick enough.  But then I learned a  couple of little tricks.

Beat the egg yolks with the sugar until they are light yellow and very thick. Trick #1: Add a little cornstarch to the sugar and it will help thicken the custard in no time.  (Thank you Australia). 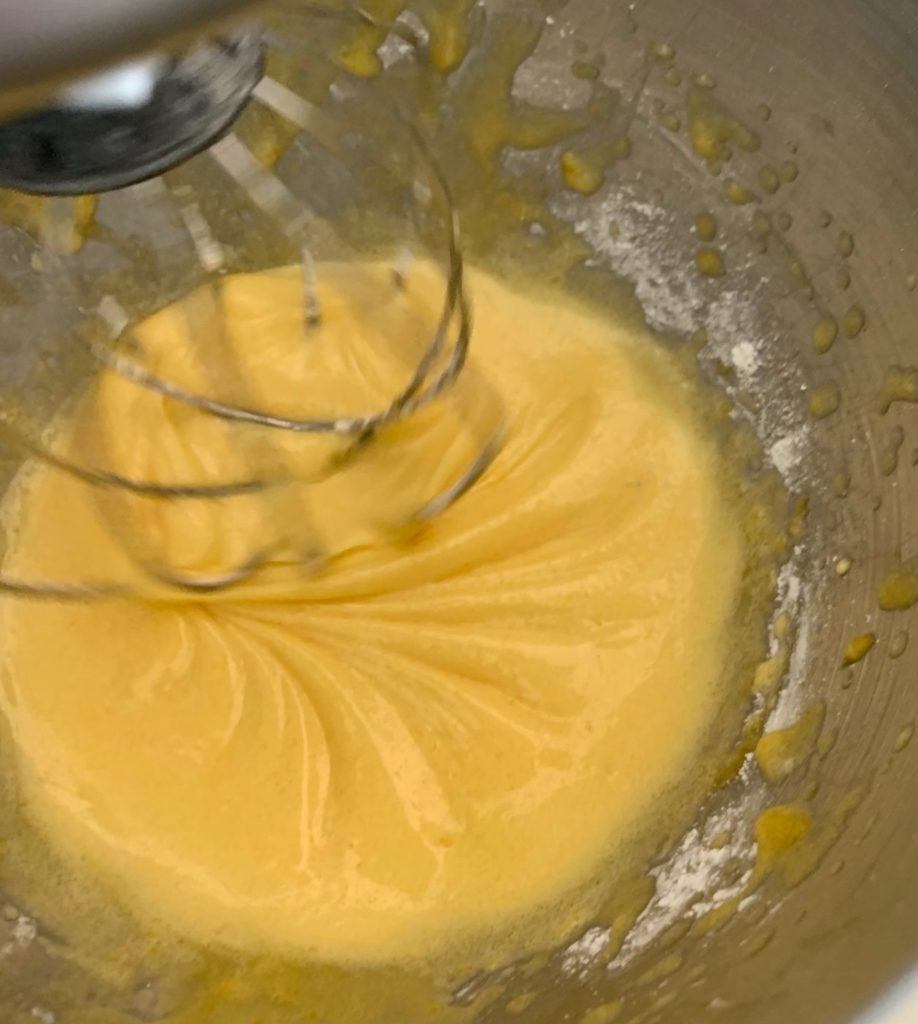 Trick #2: Instead of adding cold liquid to the egg yolks and heating it slowly over a very low flame, heat the liquids to almost boiling and slowly pour them into the egg yolks while the mixer is running. Then put the mixture over a medium flame and stir it for four to five minutes until it is thickened.

Put it in a cold bowl to stop the cooking.  Let it cool, stirring it every so often until it is room temperature. 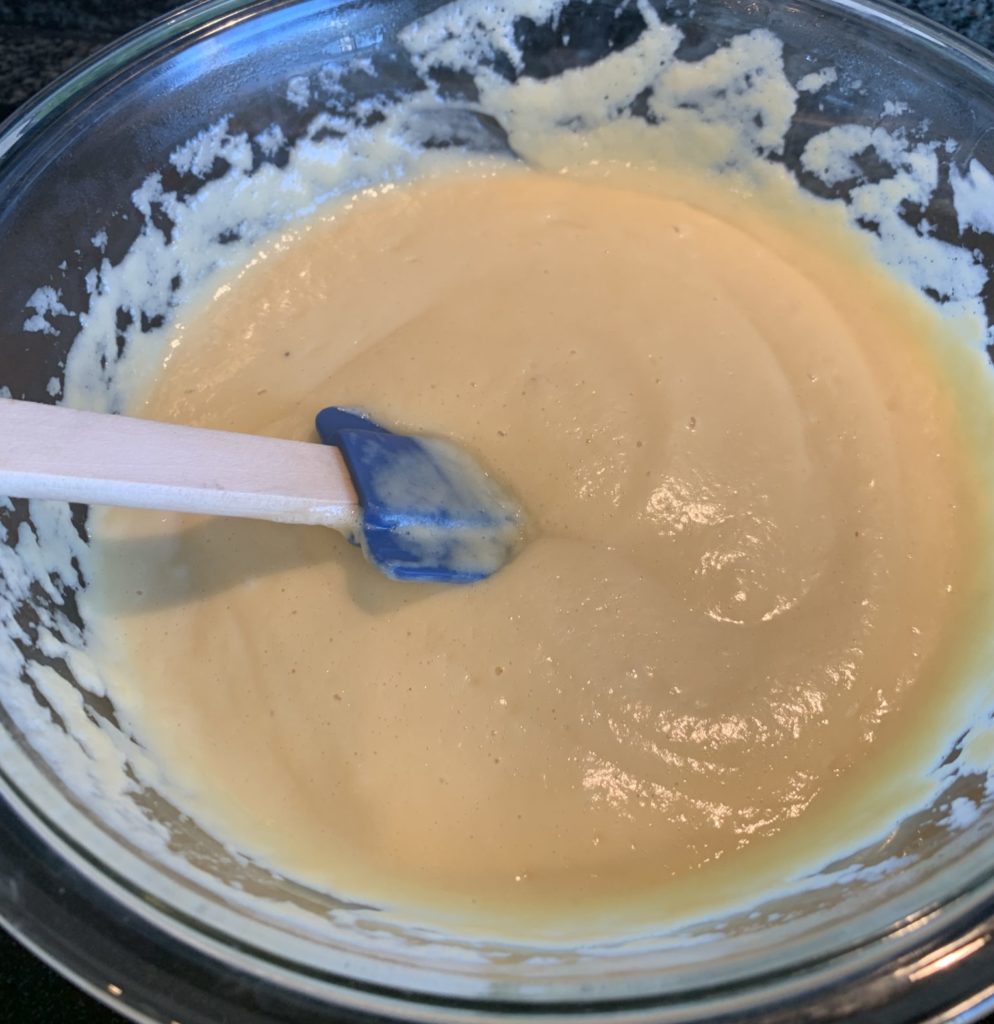 The custard will continue to thicken as it cools

Now cover the surface with plastic wrap to stop a skin from forming and put it in the refrigerator until well chilled. This can also be done the day before.

Pavlovas are ephemeral desserts.  Once assembled, they need to be eaten within a few hours.

So assemble them shortly before you want to serve them.

Whip some cream to thick and stir in half of custard.

If you are making a single layer Pavlova, spread the whipped topping over the base then dribble some custard over that.  You can top it with chocolate if you like.

This was my first version. As I said, it tasted delicious but is lacking in appearance! 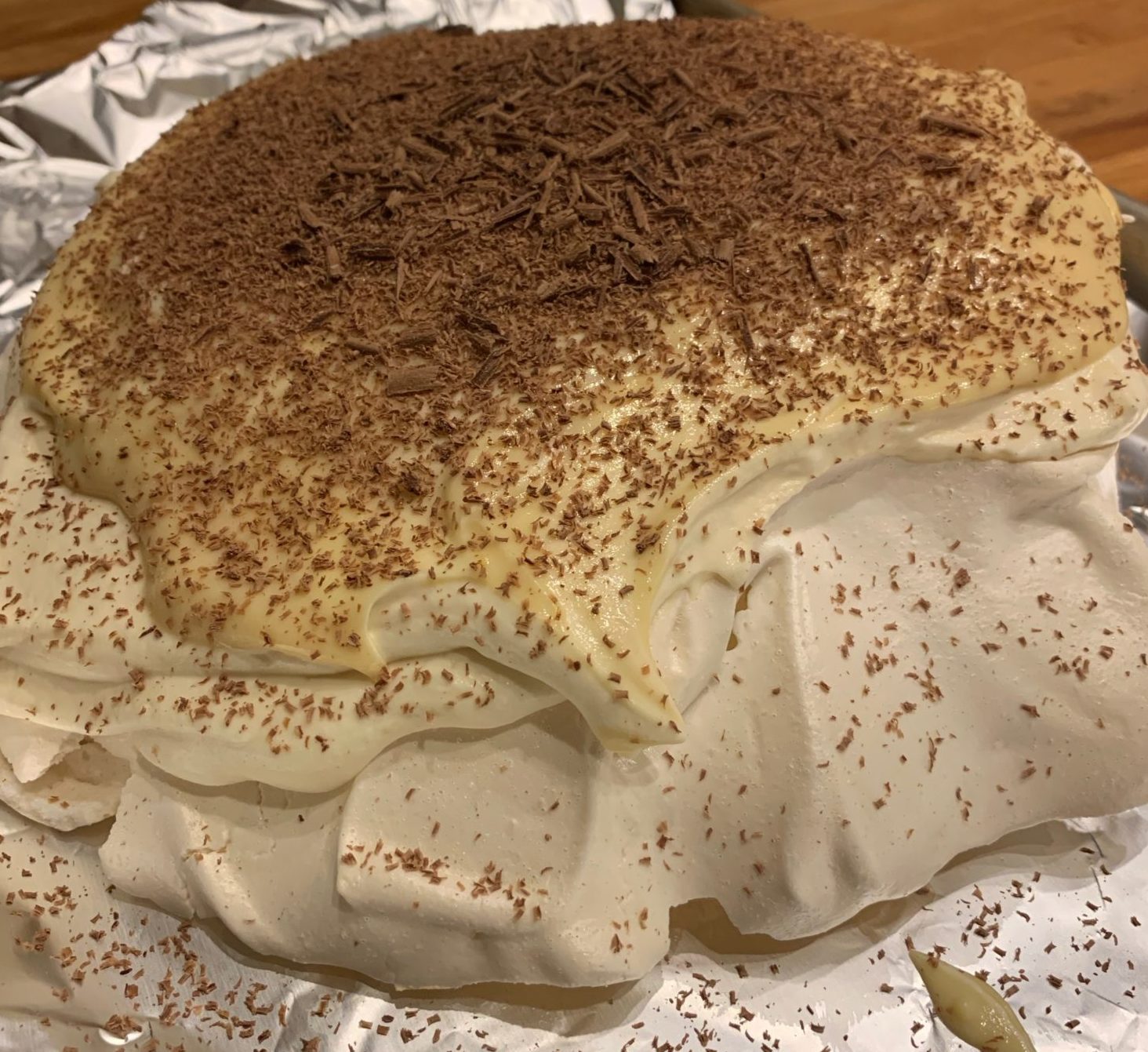 This tasted delicious but didn’t exactly wow the table!

So this time, I made two layers and I will put some of the whipped topping between the two layers, adding a layer of berries, then finish the Pavlova with more of the topping and berries, passing the extra custard to those who want it. 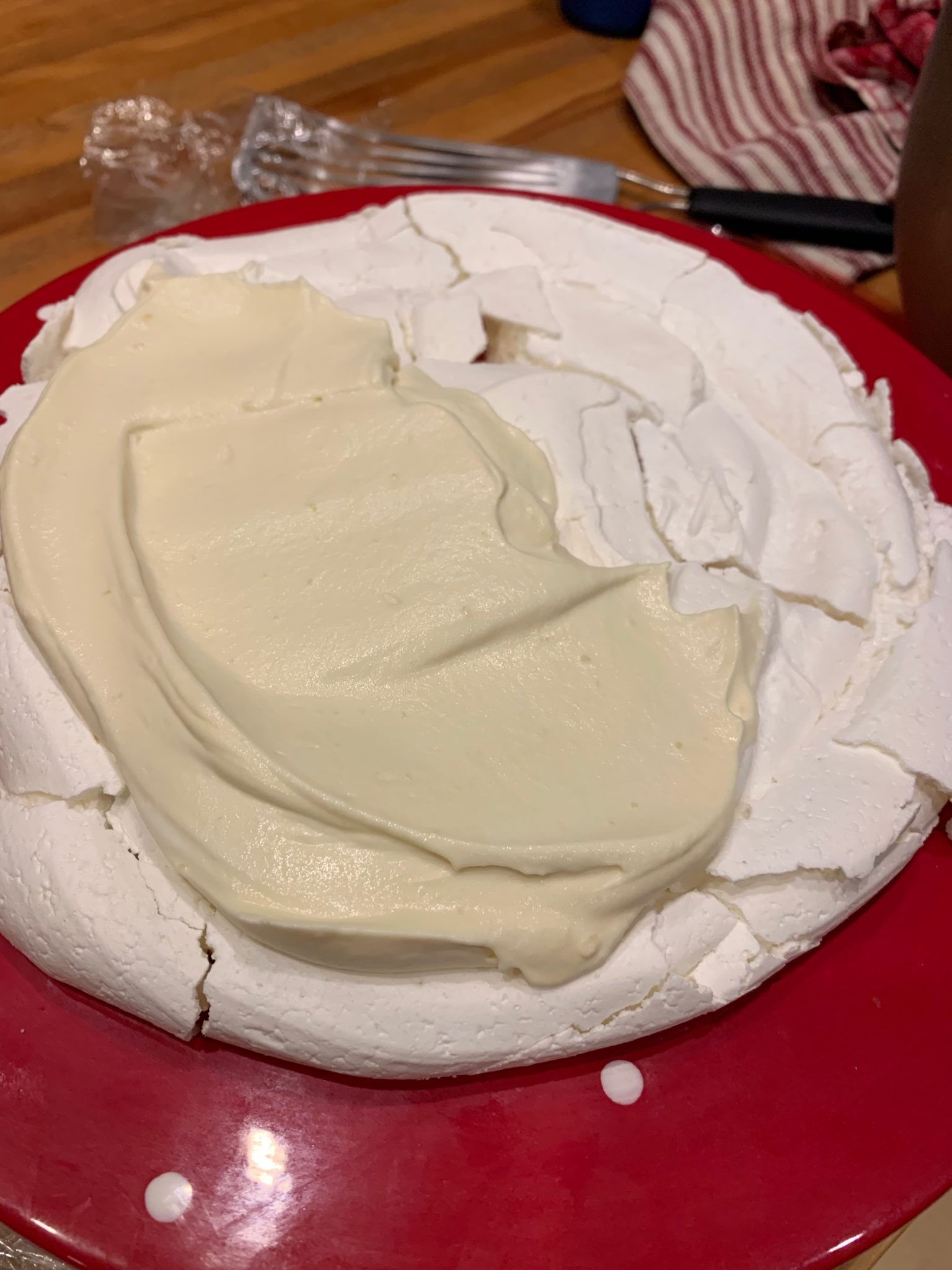 The custard cream will cover all manner of mistakes!

Repeat with the second layer.

You should not assemble this too far in advance.  It will hold for three to four hours (although it will still taste good if you have to wait longer!).  Store the cake in the refrigerator. 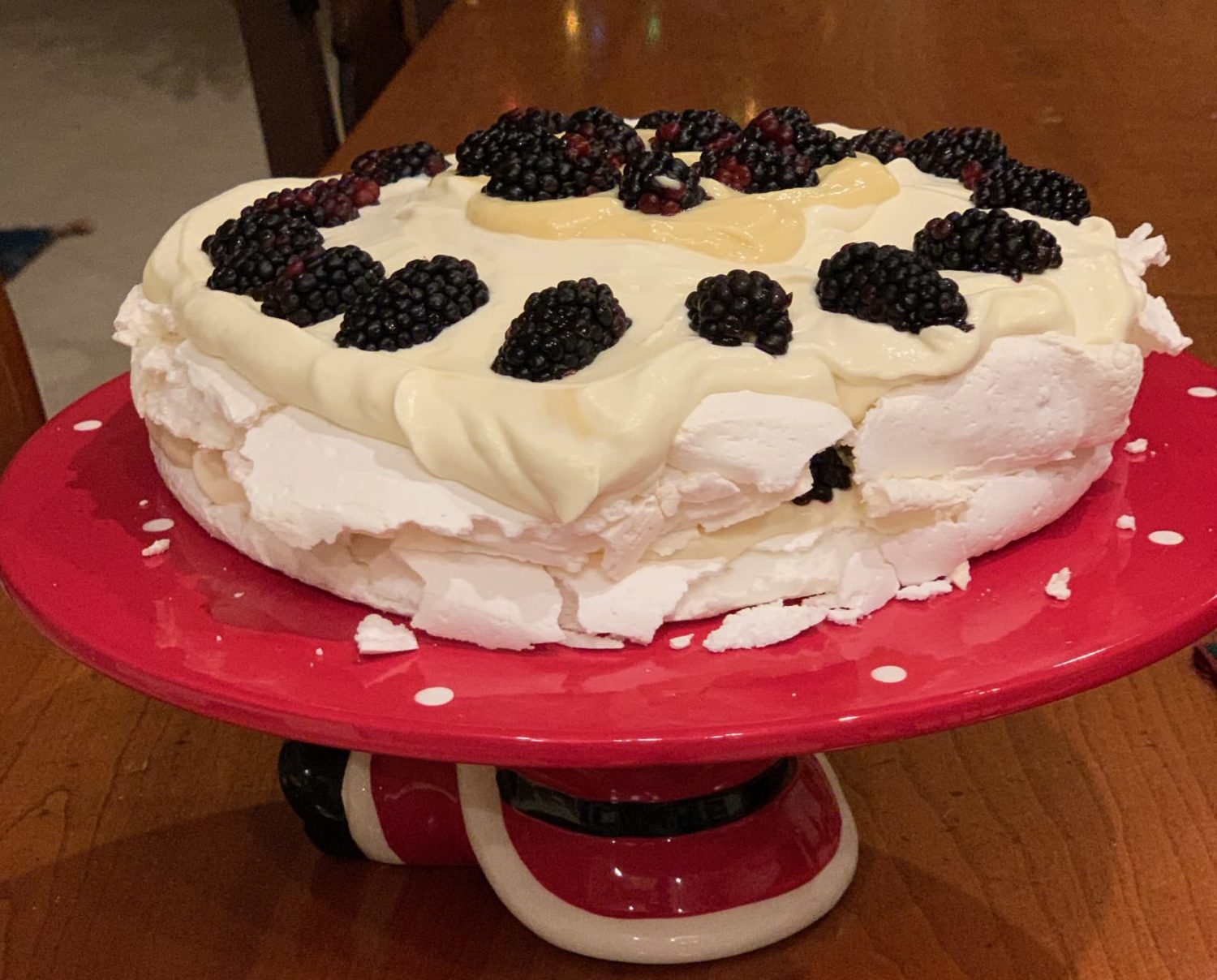 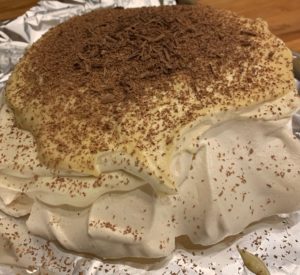 To finish the Pavlova

To make the meringue

To make the custard

To assemble the Pavlova