Subscribe to the Blog!
You are here: Home / Baking / TOMATO PIE: IT’S A SOUTHERN THING 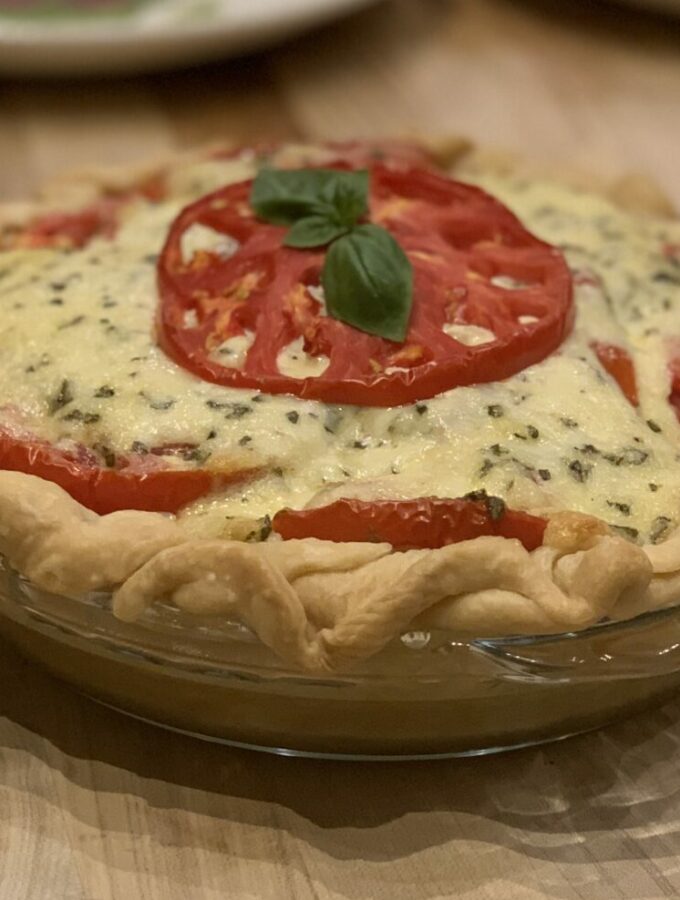 Recently I asked my Instagram followers  (@awomancooks) what they would make with a big tomato harvest, and I got a resounding chorus of “Tomato Pie!”.

Tomato pie is not something I am very familiar with.  I am purist when it comes to home grown tomatoes.  I eat them sliced with a little salt, in a Caprese salad, or in a sandwich (tomato or BLT only!).  The idea of layering them in a pie crust and cooking them with a mixture of cheese, mayonnaise and fresh herbs seemed a sure way to hide the flavor of the tomatoes.   But I was wrong.

After a lot of research I made some tweaks to the basic recipe and it was delicious. A thin layer of creamy cheese and herbs is sandwiched between thickly sliced tomatoes accenting the flavor of the tomatoes and making a great choice for a light lunch or side dish. 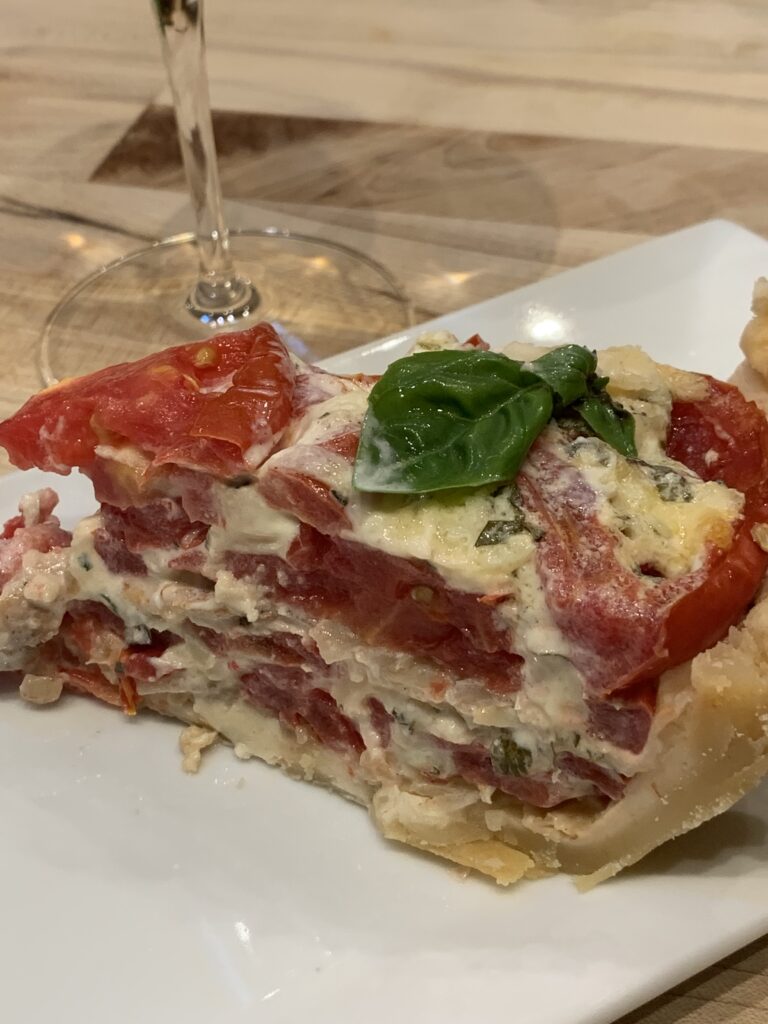 A double layer of tomato is separated by cheese, bacon and onions

A common problem with tomato pie is wateriness caused by the moisture of the tomatoes seeping out as they cook.  In order to prevent this, you need to plan ahead a bit.

At least an hour before you want to bake your pie, slice the tomatoes thickly and separate out the seeds.  Place them in a single layer on a paper towel and sprinkle lightly with salt.  After half an hour turn them over onto a fresh layer of paper towels.  If you have time, start this step in the morning and keep turning and drying the tomatoes for up to eight hours. 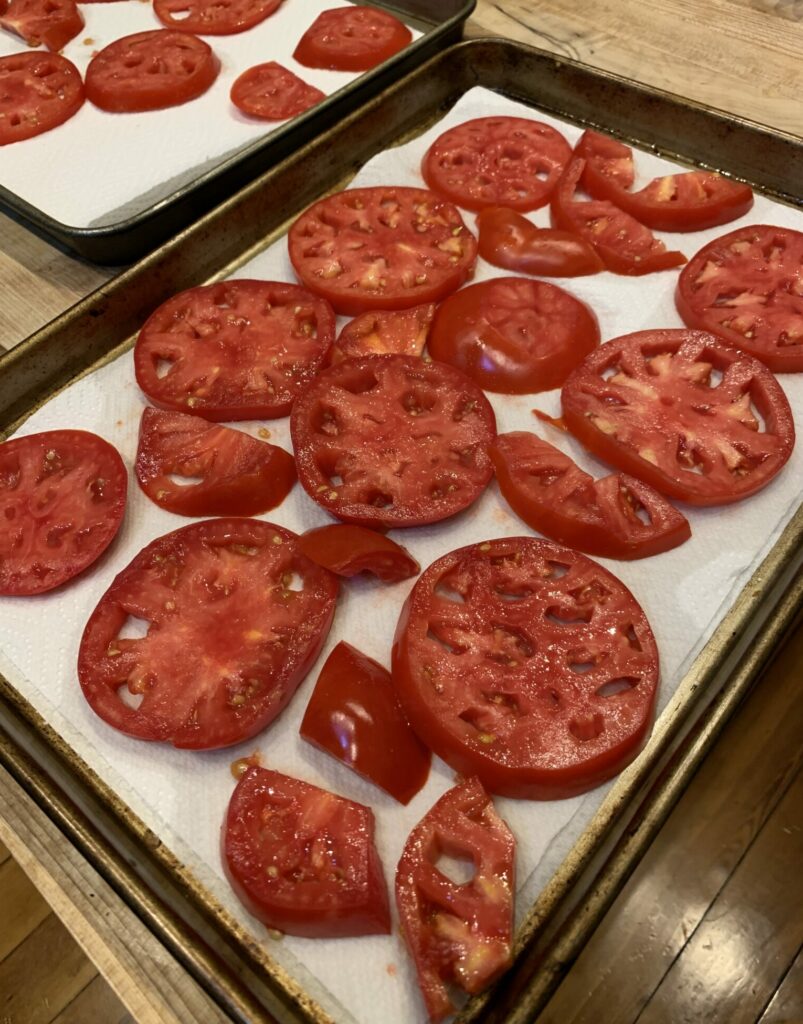 I was tempted to put my trays outside in the sun in order to dry them further.  I may try this next time!

While the tomatoes are drying, prepare your pie crust.  You can use my recipe, here, or a  Ready-to-Roll piecrust.  The crust needs to be thick in order to hold up to the tomatoes.  Roll your homemade pie crust about ¾” thick or use both of the piecrusts from the Ready to Roll package, placing one on top of the other and rolling them together.

Blind bake the pie crust and set the crust aside to cool until needed.

Cook 4-6 slices of bacon until they are crisp. Then use the fat from the bacon to sauté a sliced onion until it is starting to caramelize.  Dice the bacon and add it to the cooked onions and reserve until you are ready to assemble the pie.

When it comes to cheese, I chose an “Italian Style Melt and Stretch” Mozzarella over the creamier and harder to melt Buffala Style Mozzarella.  I thought the melt and the milder flavor would be a better match for the cooked tomatoes.

I did want some cheese flavor however so I also used a Fontina cheese.

A trip to my garden gave me a few handfuls of fresh basil, thyme and oregano which I chopped up and added to the cheese.

Finally, mayonnaise, and it has to be Duke’s!

Stir those all together and get ready to assemble your pie. 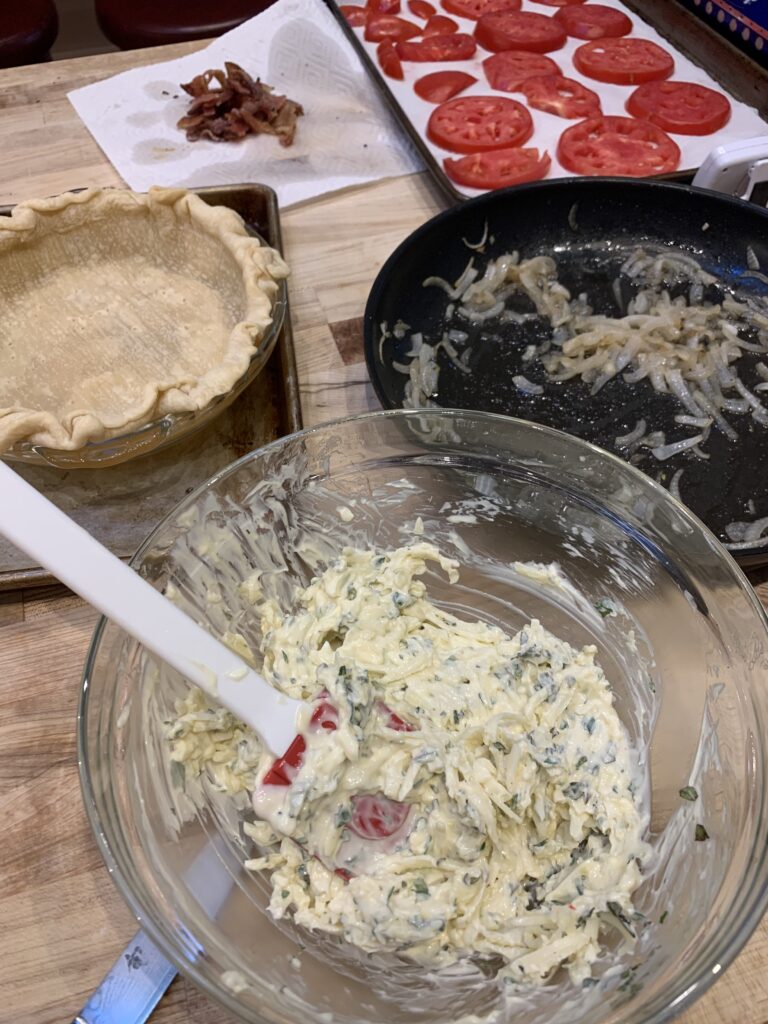 Bacon, onion, cheese and mayo with fresh herbs and tomato ready to make a pie!

Begin with half the bacon and onion mixture.  Spread it evenly over the crust.

Next take half the tomato slices and put them in the pie.  Use the smaller pieces to fill in all the cracks and gaps.

Use a spatula to spread half the cheese mixture on top of the tomatoes.

Now repeat the whole process ending with the cheese sauce.  You can put a slice of tomato on top to make it look pretty if you like. 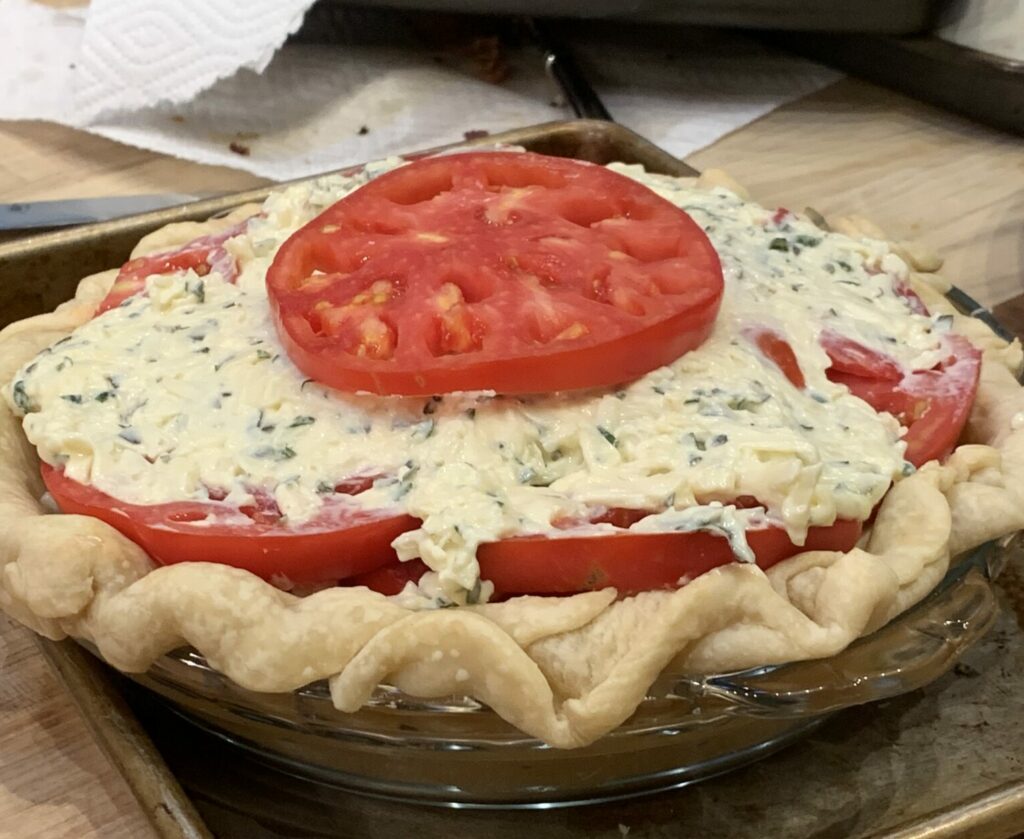 Bake it in a preheated oven until it is hot all the way through.  An instant read thermometer should read 175 or more when inserted in the center.

I let the pie sit for 10-15 minutes to set before serving it.  You can eat it hot, cold or at room temperature. It’s good any way you slice it!

Slice and dry the tomatoes

Cook the bacon and onions 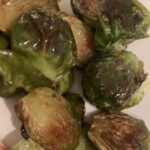 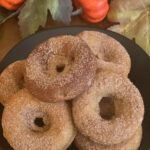 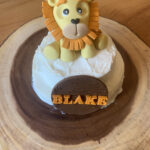