Subscribe to the Blog!
You are here: Home / Baking / APPLE TART FOR BEGINNERS: NO ROLL PASTRY 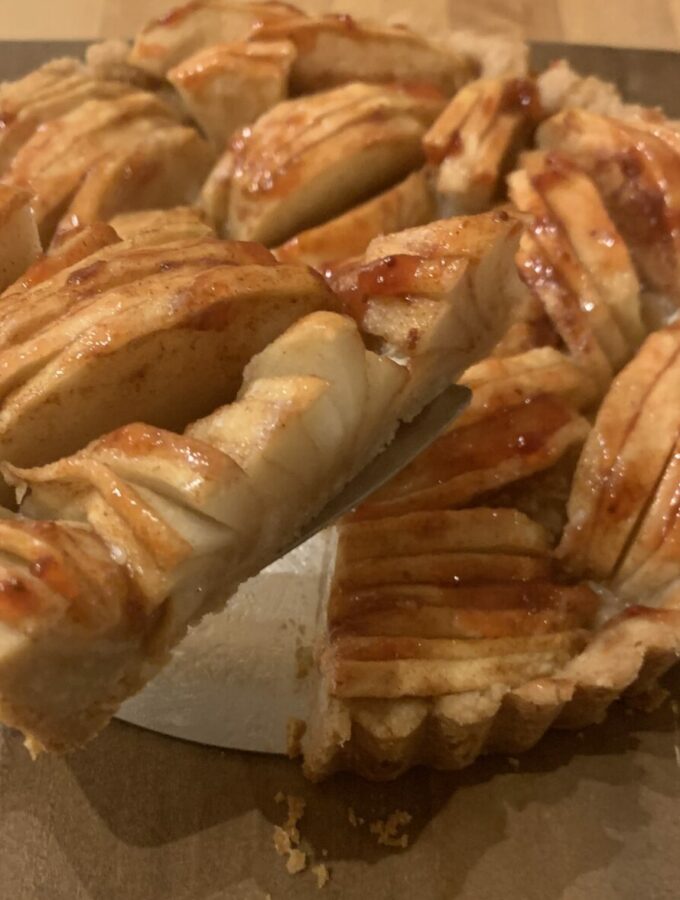 With its stylized layers of apples and free standing crust, an apple tart is one of the most impressive things a home baker can bring to the table.  It looks so hard to make!  With this recipe, it’s not.  If you can slice an apple and press dough into a pan, you can wow your friends and family and enjoy a home made apple tart with pride!

We went apple picking last weekend.  It was a lovely sunny day with just a hint of coolness in the air.  The orchards were pretty crowded but we headed back to where some of the lesser known apples were growing and found ourselves alone in a wonderland of trees heavily laden with Winesaps and Cameos. So of course I picked too many apples and we have been eating apple everything ever since. 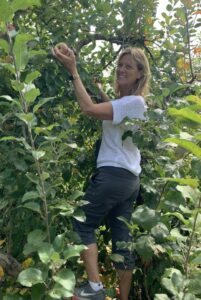 The first dish I wanted to make was an apple pie.

It was late by the time we got home.  Too late to be making pastry and cooking a pie.  Then I remembered a technique for a no-roll pastry that I had been wanting to try.

This is a easy pastry: no butter to cut into flour, no resting time in the refrigerator, and, easiest of all, you don’t roll it, you press it into the tart pan.

Take your time with this step.  Cut the apples thinly in even slices.  If you can get this step right you are going to end up with a killer tart that looks like it came from a pastry shop! 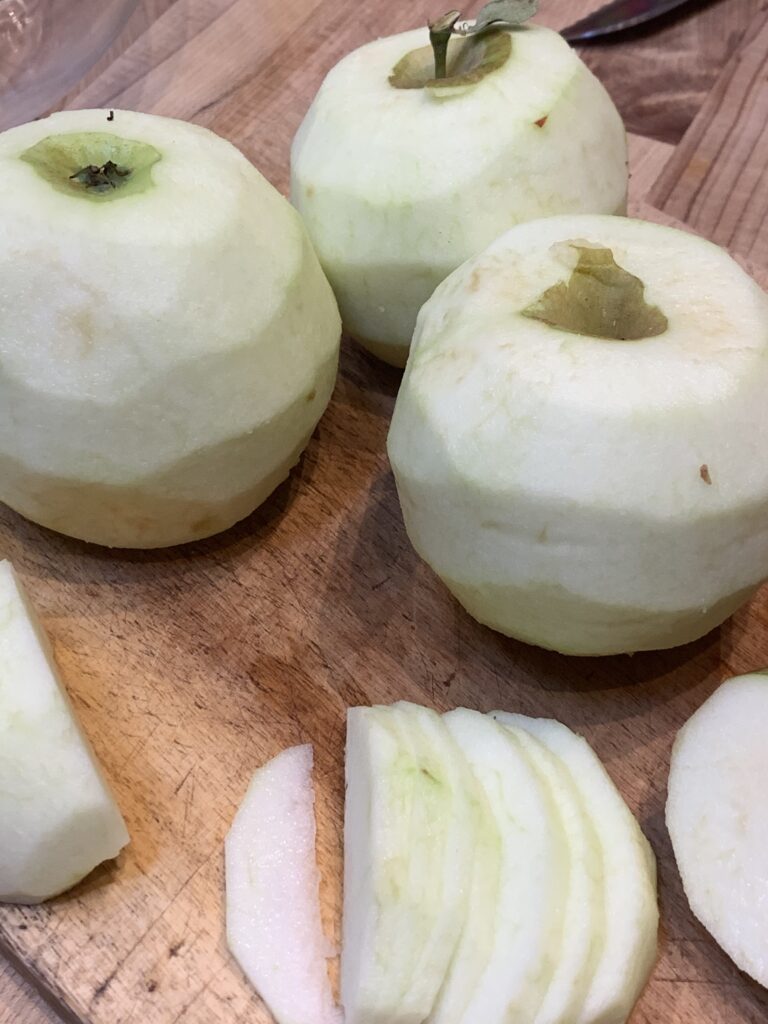 Try to cut even slices for your tart

Put the apples in a bowl and add some sugar, spices, vanilla and salt. Squeeze some lemon juice on top and then use your hands to carefully toss the apples in the mixture.  Be careful not to break the slices but try and make sure each slice is lightly coated. 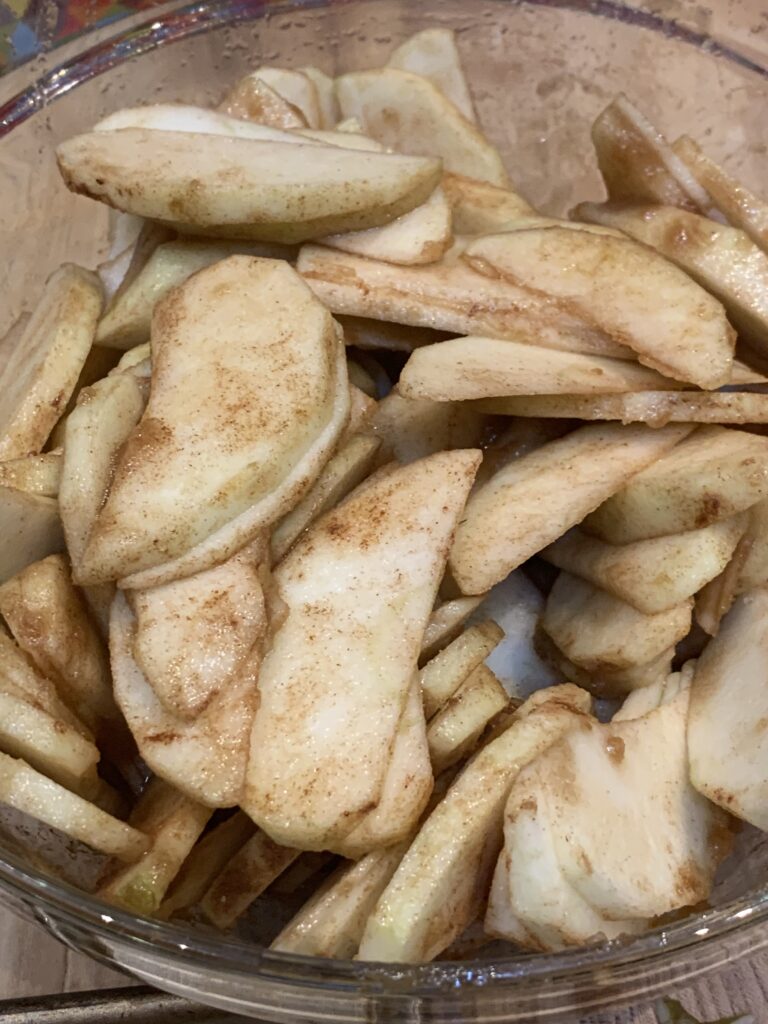 Set the bowl aside while you make the “pastry”.

Put flour, brown sugar and salt in a bowl and then add melted butter.  Use a fork to stir it until it comes together. 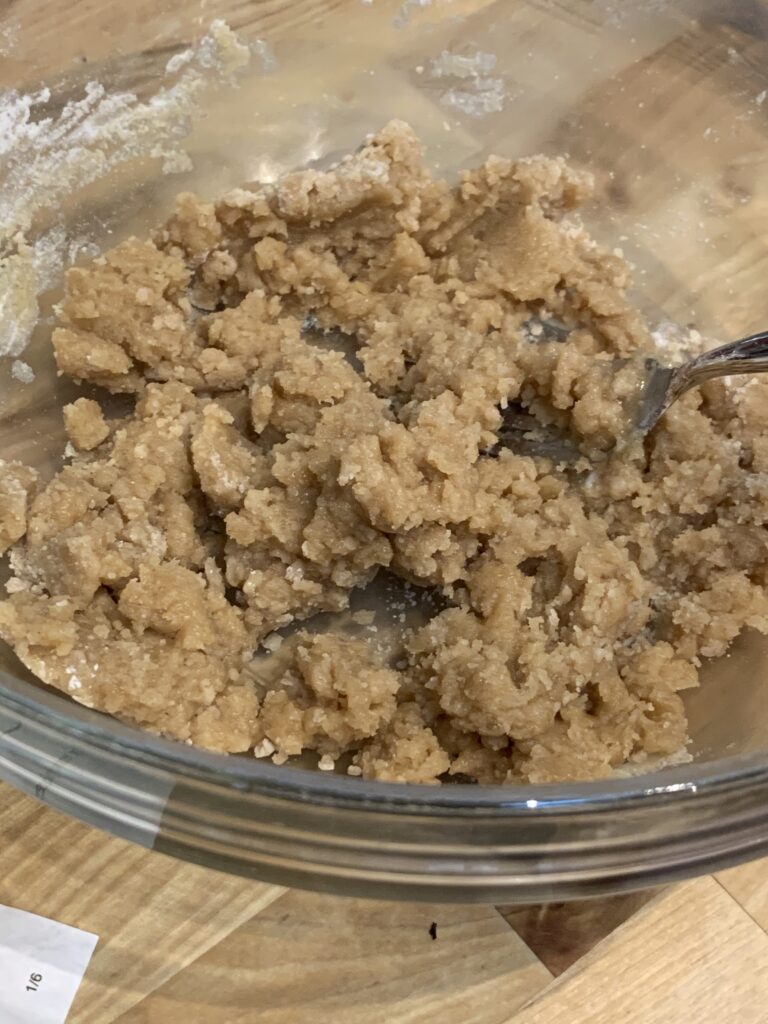 Use a fork to stir it together until it is sticky

Put the dough into a tart pan and use your fingers to press it evenly in the pan, making sure to spread the dough up into the edges. 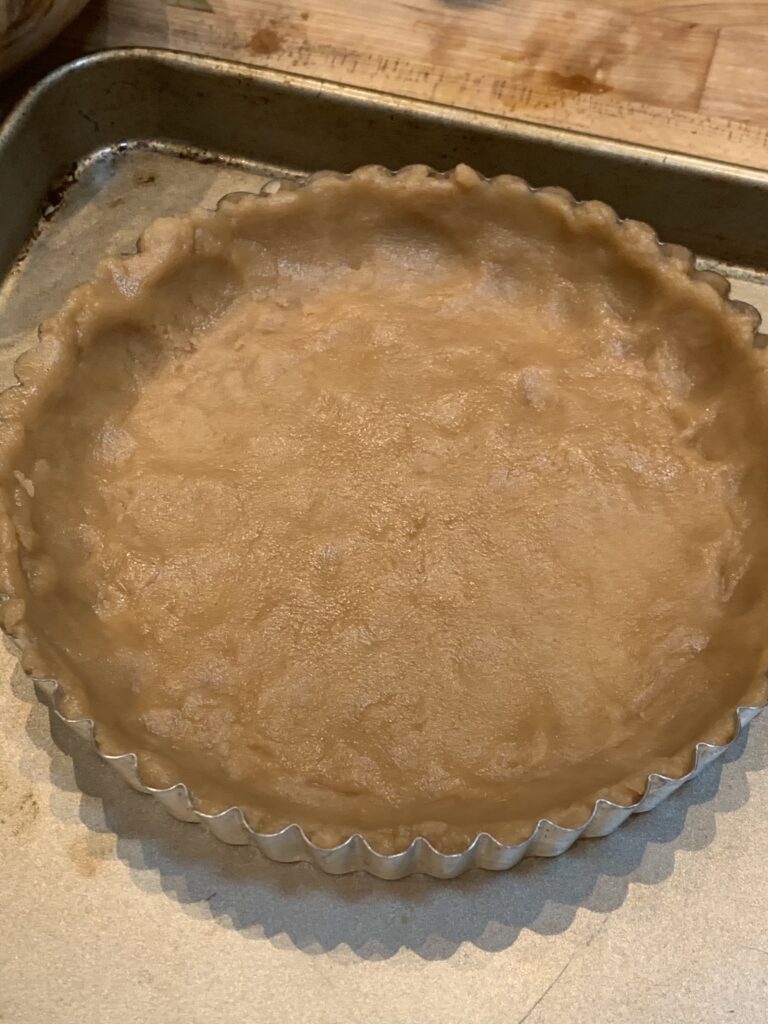 Press the pastry evenly into the pan including the edges

Drain the apples, reserving the liquid.

Put the apples on top of the pastry in the tin. You can just toss the apples in if you like, or you can take a little extra time to make a decorative arrangement out of them. 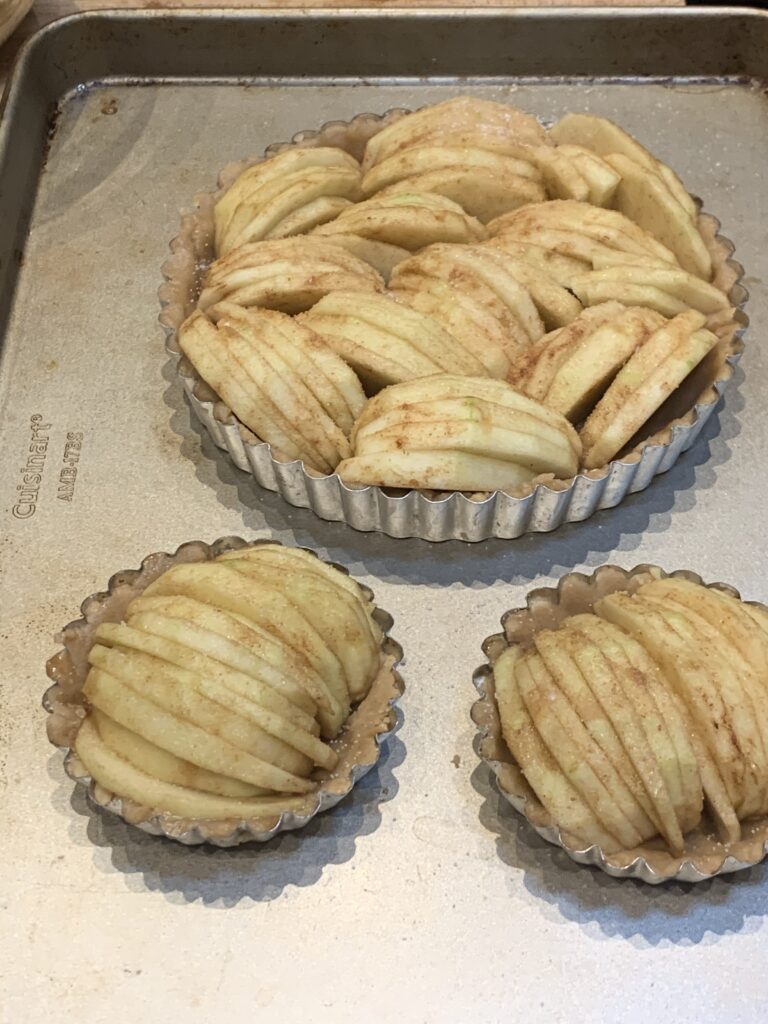 Sprinkle the top of the apples with a little sugar and cinnamon.  Dot the top with butter and bake it until the crust is browned and the apples cooked.

To finish the tart, you can reduce the apple juices to  make a glaze or melt a little jelly (apricot or apple) in and pan and brush it over the apples as it cools. 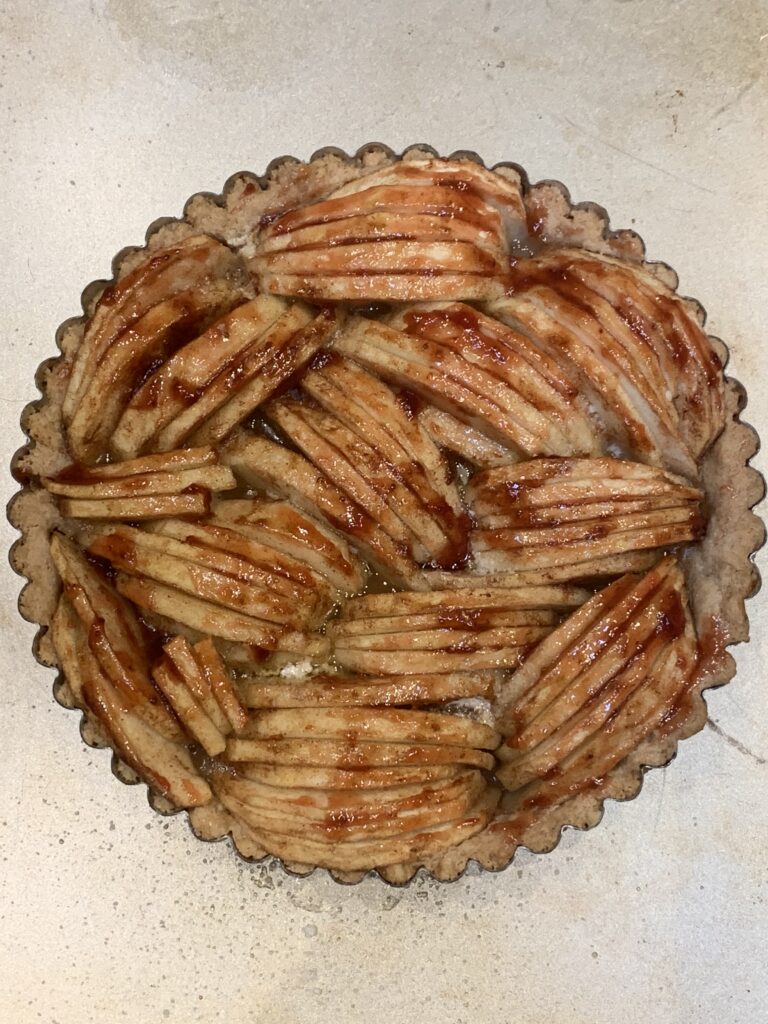 Once the tart has cooled, carefully remove it from the pan. 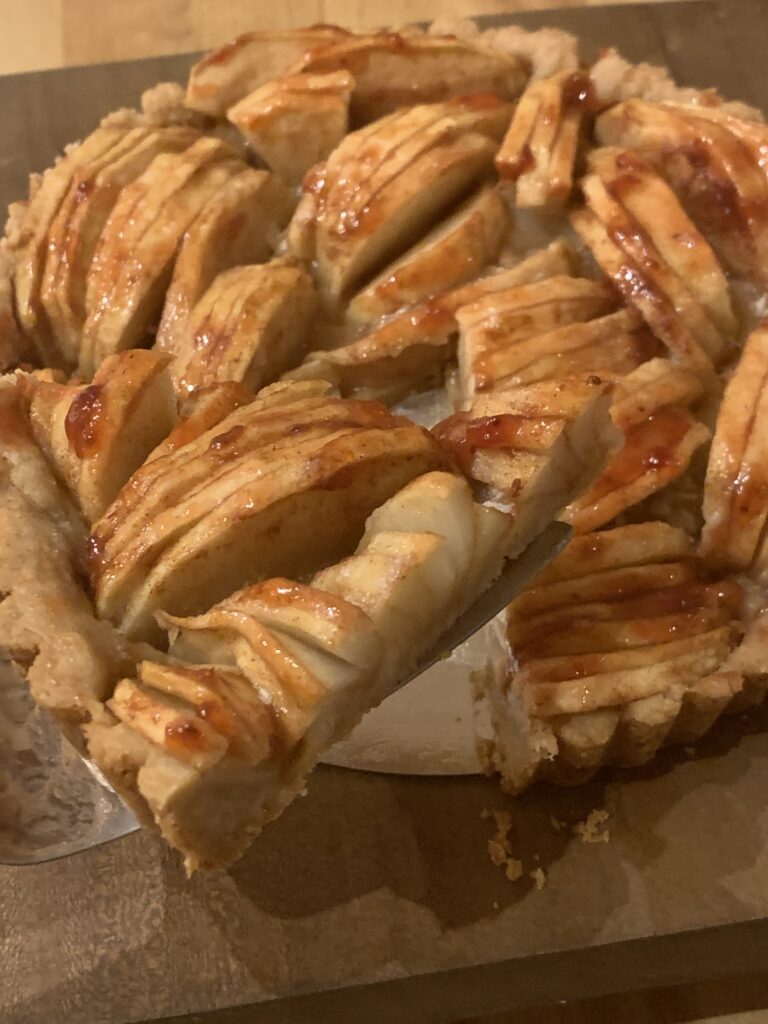 Layers of delicious apple on a crunchy sweet tart base

You know how easy this is?  I had my boyfriend, Rick, make one for a dinner with friends! And here is his: 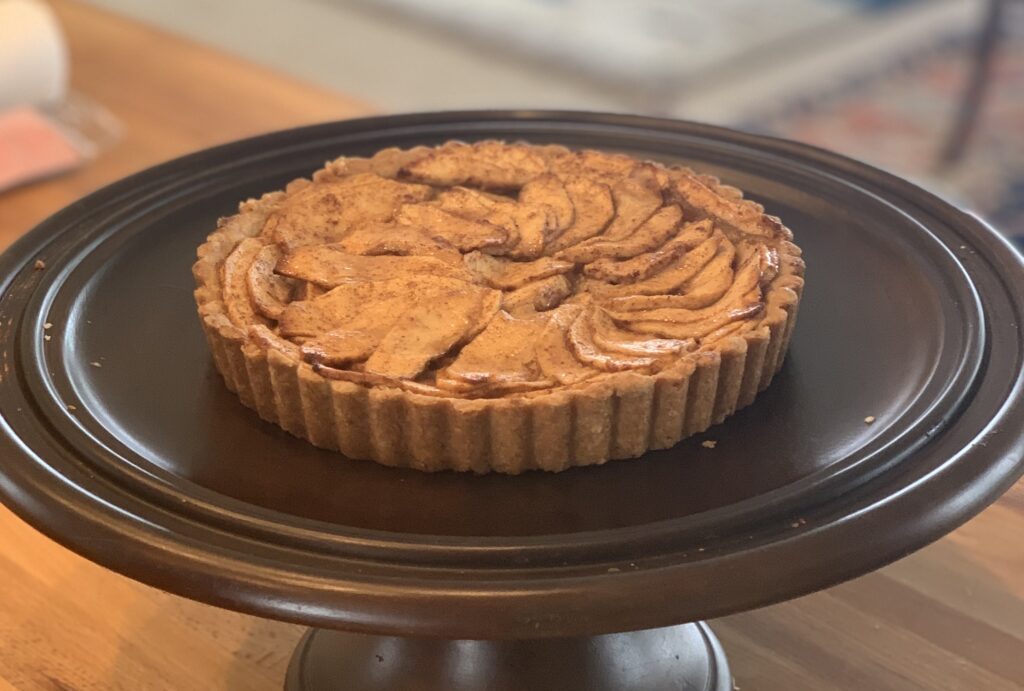 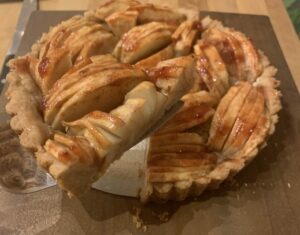 APPLE TART WITH NO ROLL PASTRY

Apples for the filling

To Assemble the tart 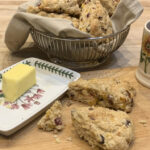 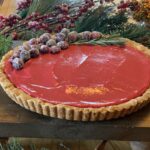 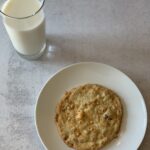 It’s cold with ice and slush outside my door. No

Over the weekend, we had a tasting with @colorfulp

Meanwhile, Omicron may be mild for most people but Best part of a snow day! Hot chocolate after shov

Yay for snow or Boo? Im definitely Team Yay! My

Let's be real: baked goods are what January needs!

As if it's not cold and dark and dreary enough, people decide this is a good time to give up pleasures--time to go on a diet, to quit drinking, stop eating chocolate. Save that for Lent, People! And make some scones: crumbly. soft pillowy scones filled with the leftover fruits and flavors of the holidays!

SCONES FOR JANUARY - A Woman Cooks in Asheville

Over the weekend, we had a tasting with @colorfulpalate for our wedding. This grilled salmon on broccoli slaw with pickled chow chow and homemade potato chips was a clear winner. We are still talking about the seasoning on the chips! #homemadetastesbetter #grilledsalmon #awomancooks
.
.
.
.
#weddingfood #ashevillecatering #southernfooddoneright #homemadechips #ashevillefoodie #ashevillefood