Subscribe to the Blog!
You are here: Home / Main Courses / LEARNING FROM THE BEST: BBQ COUNTRY STYLE RIBS 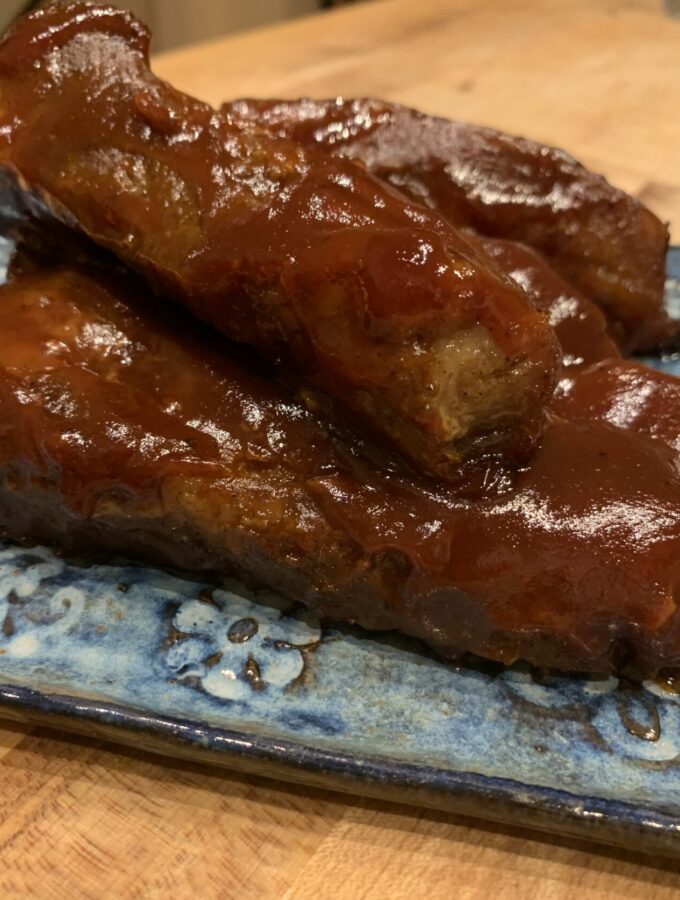 I am obsessed with the American BBQ Showdown on Netflix.   It’s weird, I know.  I don’t do a lot of bbq, mostly leaving that to my skilled and capable son-in-law.  I love BBQ  but it’s always seemed a little one note to me.  However, there’s not a lot that’s new on TV these days and this show caught my eye.

I’m so glad it did.  I have learned a lot about meat and Southern sides and the vast array of people who love to make it.

Kevin Bludso and Melissa Cookston are the judges and they are good.  Melissa in particular knows how to cook the meat and sides.  She can spot a mistake from a country mile away and then she will go and talk to the contestant about it.  It amazes me that they don’t listen more!

There is camaraderie, competition, joking, education, and best of all, the contestants support each other and help each other.

Which leads me to my dinner last night: BBQ Country Style Ribs.

This cut of meat is most often referred to as Country Style Ribs but they aren’t really ribs at all.  They are cut from the loin chop just under the shoulder.  They are cut long and are usually arranged in the butcher’s tray like standard pork ribs.  But they are meatier with more marbling and have no bone.  Sources say that they are called “ribs” because they have the flavor and consistency of pork ribs.

I decided to put some of my new-found BBQ knowledge to the test and cook me some ribs!

It was raining so I didn’t use the grill.  These ribs are oven baked (sorry purists!)

Start with a rub.

Brown sugar, Old Bay, chili powder, cumin and cayenne pepper are mixed together and rubbed all over the ribs. 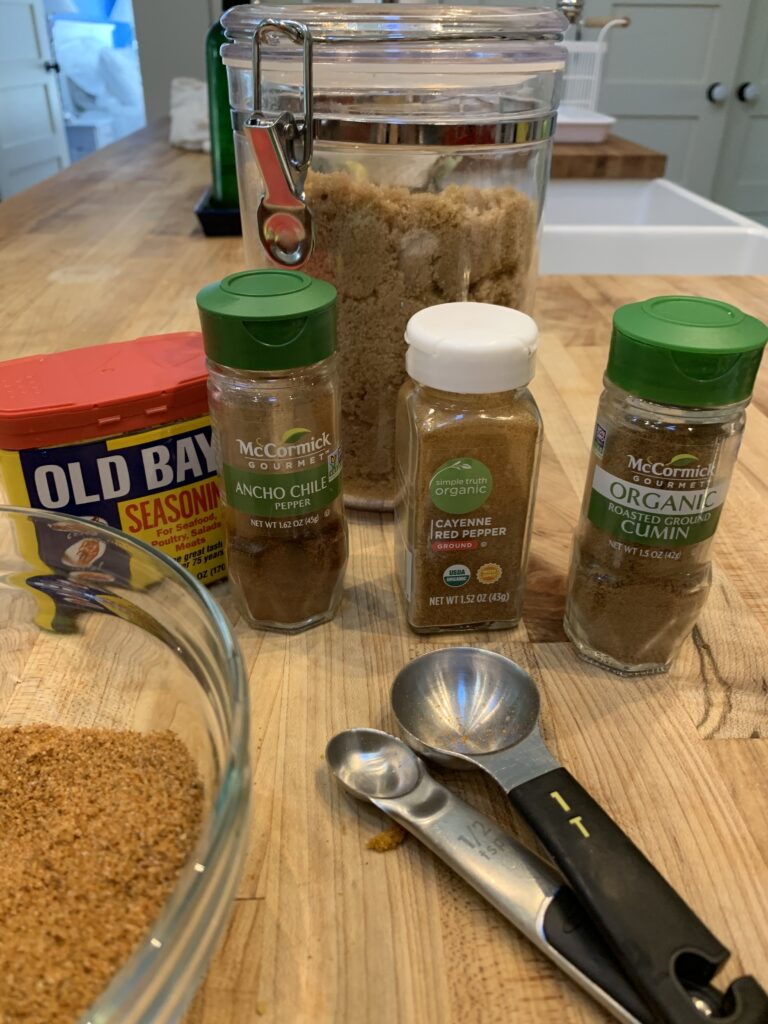 Spread them in a roasting pan, cover them and set them to cook in a slow oven for 1 ½ -2 hours. 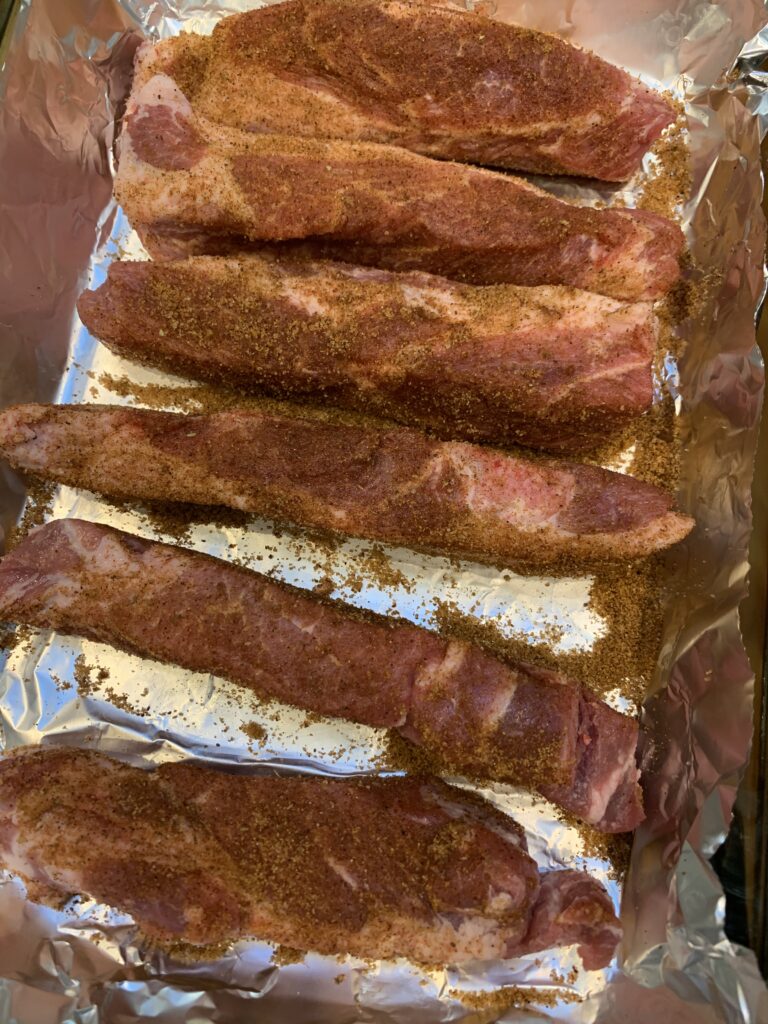 While they are cooking, make your BBQ sauce.  I have great admiration for people who make their BBQ sauce from scratch and if I were cooking for a crowd I might do it too.  In this case there was just me. So I used a short cut!

I doctored up a quality store bought sauce by adding some bourbon and a little liquid smoke.

Once the ribs were almost cooked I drained off the liquid in the pan and brushed the ribs all over with my sauce. 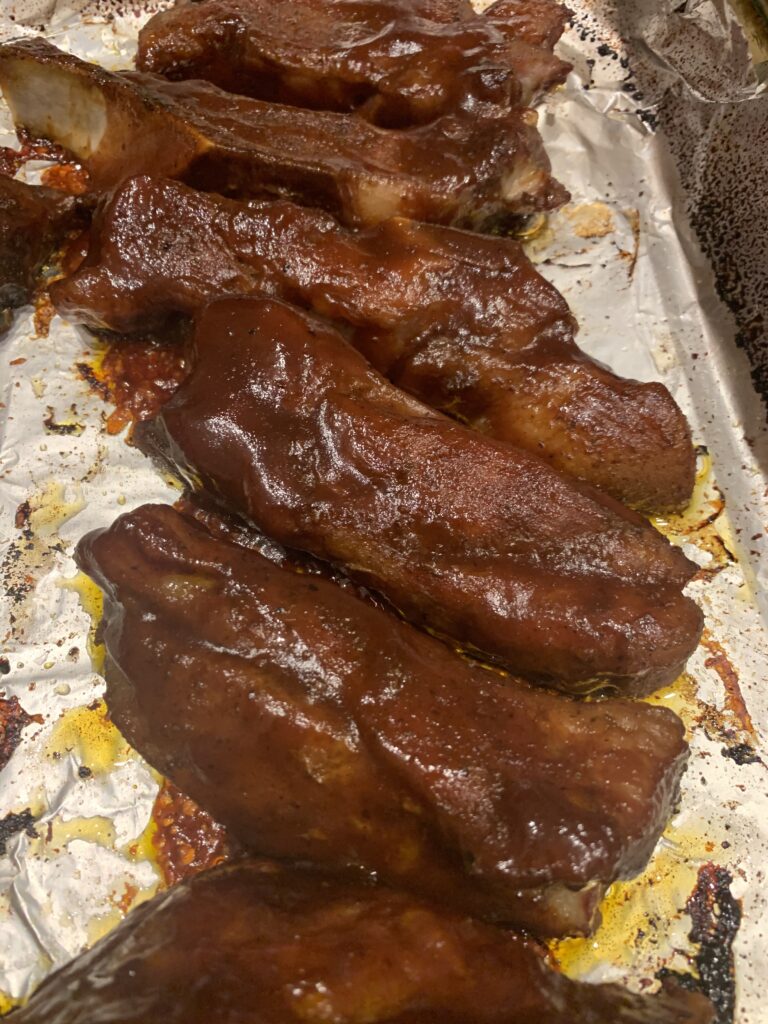 Turn up the oven to a high heat and cook them for 15 minutes.  Flip the ribs, brush with the sauce and cook for another 15 minutes.

And there you have it, tender and moist, bathed in BBQ sauce, country style ribs perfect for a Fall evening! 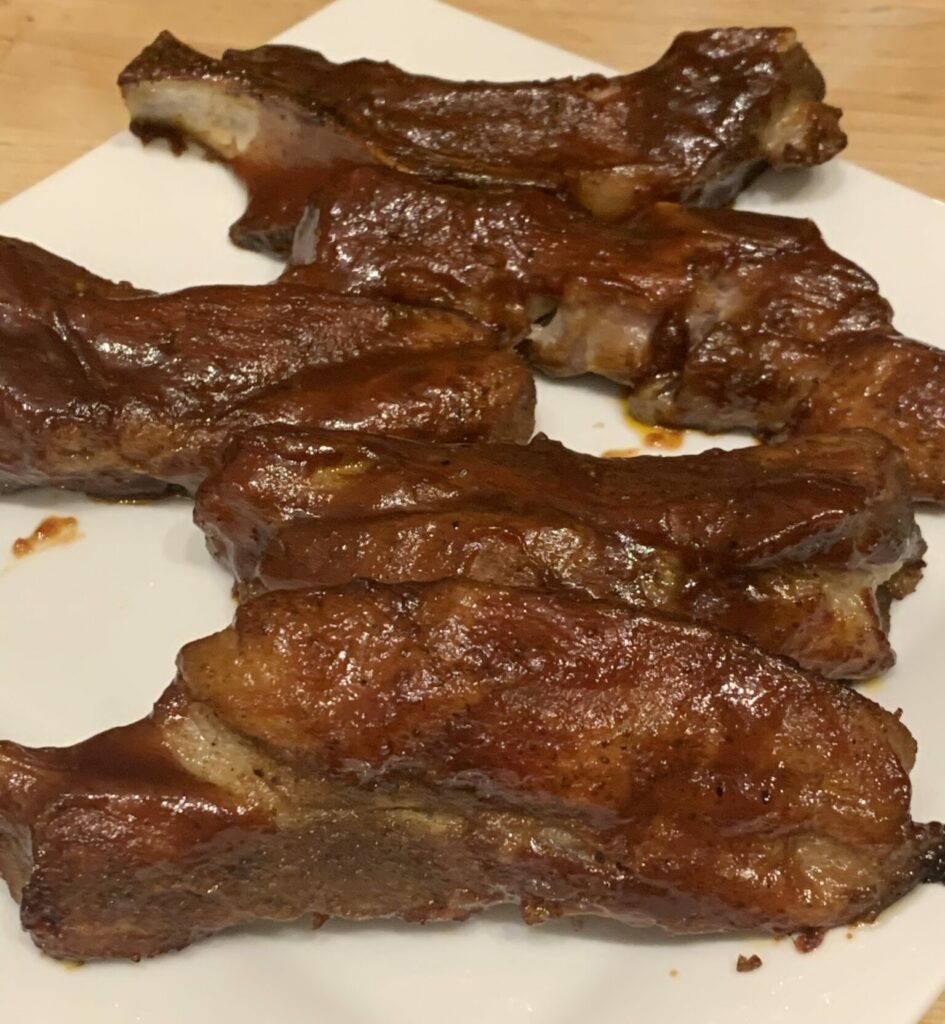 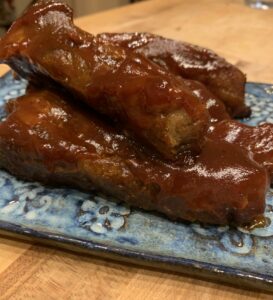 For the Dry Rub

For the BBQ Sauce

Note: This makes more than enough Dry Rub. The extra will keep for up to month in an air tight container at room temperature. 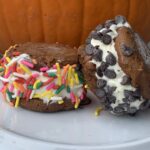 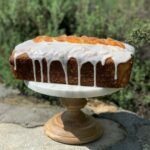 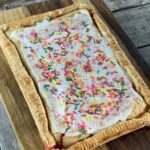 If you travel to Lexington KY don’t leave withou I have missed traveling and the opportunity to try

When the calendar says Fall but the weather says s

While I am wrangling a three year old and doing ni

I’m eating again! My first real meal was a fabu

I have been remiss in posting lately but it is har

A Woman Cooks in Asheville is in Lexington, Kentucky.

If you travel to Lexington KY don’t leave without visiting @windycornermarket Try the artichoke fritters, chunks of artichoke heart, creamy artichoke mousse and a super crispy exterior. Banana Pepper rings run circles around fried pickles. And the pies!!!! Have a slice of chocolate pecan or luscious coconut cream. The restaurant is out in the heart of horse country, on a windy corner, making the trip out and back part of the pleasure! #frieddeliciousness #artichokefritters #awomancooks
.
.
.
.
#bananapeppers #visitkentucky #lexingtonky #windycornermarket #ashevillefoodieontheroad #ashevillefoodie #travelingfoodie #foodielifestyle #friedfood #southernfood #southernfried

A Woman Cooks in Asheville is in Lexington, Kentucky.

I have missed traveling and the opportunity to try great dishes in other parts of the country. How about this Softshell Crab BLT? @carsons_lexington It was delicious with the crunch from the crab, salty chew from the bacon and creamy avocado with house made aioli. After a ten mile hike in the Red River Gorge, it was the perfect meal! #kentuckyfoodscene #softshellcrab #awomancooks
.
.
.
.
#travelandeat #ashevillefoodieontour #bltsandwich #softshellcrabblt #lexingtonkentucky #foodieontour ... See MoreSee Less